The beautiful car you see above is the Volvo XC40, it’s the first five-door compact SUV from the brand and by the end of this article you’re going to find out if it’s better than the Audi Q3, BMW X1, and Mercedes-Benz GLA. 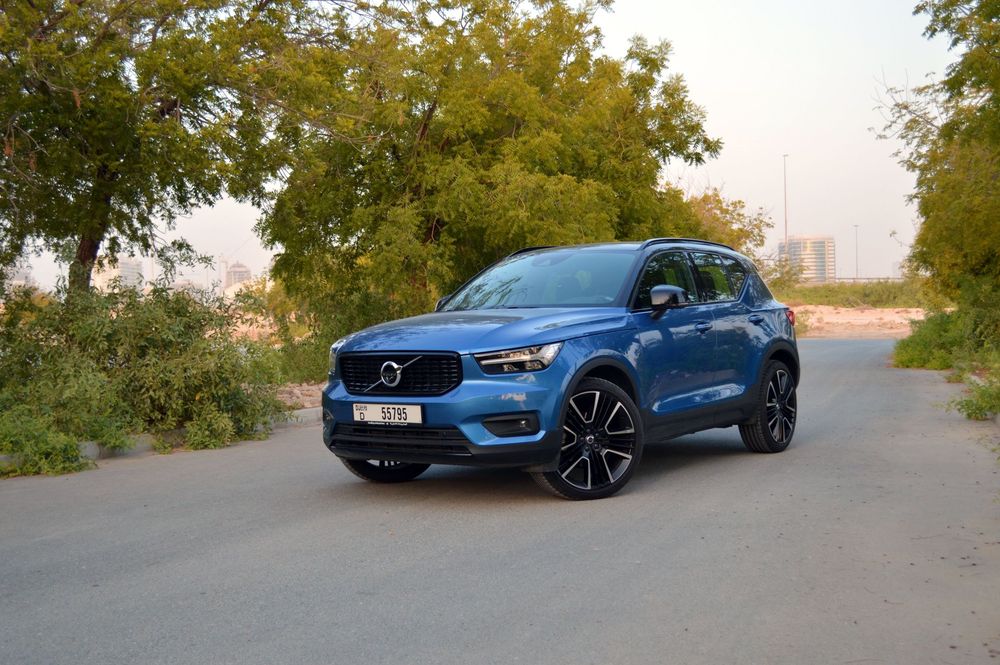 Now, some say that beauty is in the eye of the beholder but the XC40 is a great looking car bar none. It’s funky, it’s youthful and it’s different. Our tester being the sporty R-Design model gets black details along the bodywork, a set of beautiful 21-inch alloy wheels, and a few tweaks inside too.

What’s truly fascinating is that even though the Volvo XC40 is a compact SUV, it hasn’t got any awkward angles and the designers have done a great job of channeling the brand’s identity. It is distinctly a Volvo and if you ask me, it’s the best looking amongst its rivals. 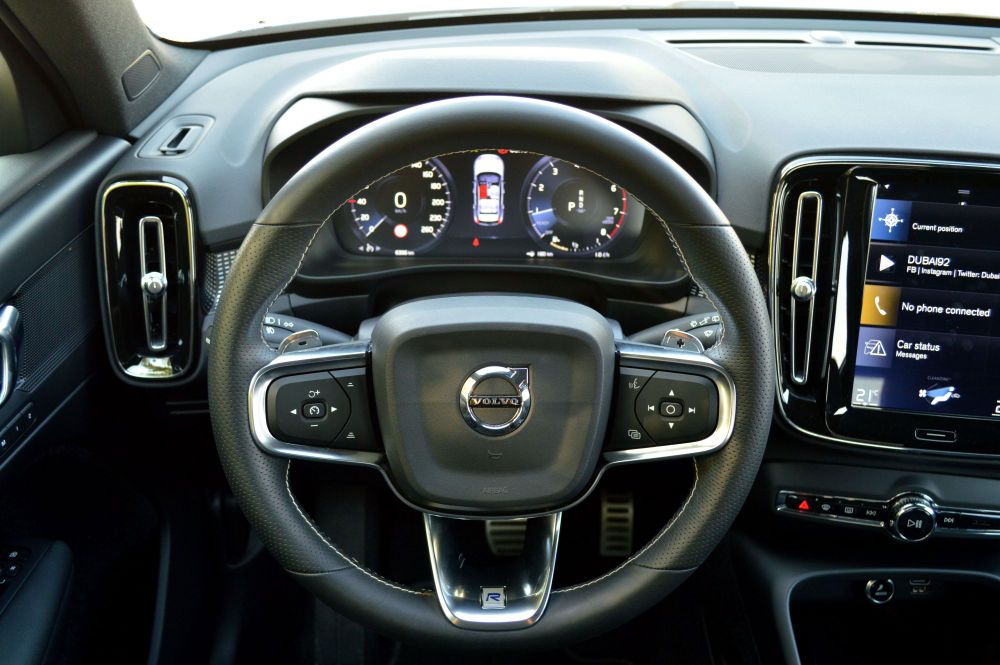 Part and parcel of being an automotive journalist is that I get to drive many, many cars and in doing so I tend to find many similarities. For example, I’d drive car ‘A’ and discover it’s quite like car ‘B’, which is quite like car ‘C’, which isn’t very different to car ‘D’. But it’s very rare for me to get into a car and say “Woah, this is like nothing else out there”, and that was my reaction when I got into the XC40.

You see Volvo has really pushed the bar when it comes to thinking out of the box. Let’s take the door panel as an example. Everything from a 40,000 Dirham Kia to a million Dirham Bentley comes with speakers in the door panels, but not the XC40. The speakers have been eliminated and in doing so it’s opened plenty of storage space. The storage bins are now big enough to fit a laptop or three 1-liter water bottles in each door! 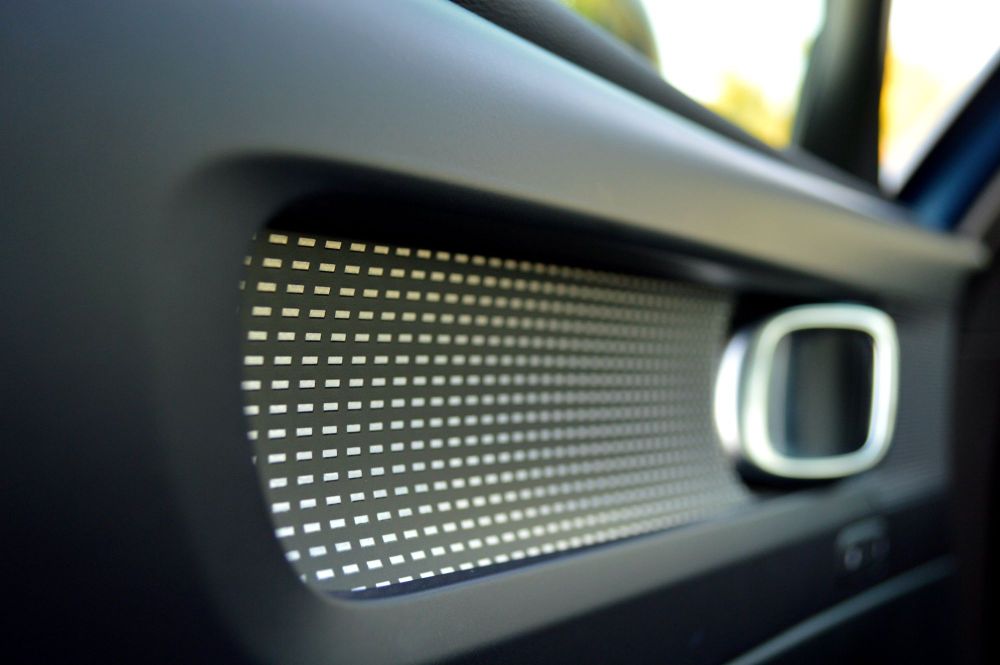 Next up, the materials. Since the XC40 is the most affordable SUV in the brand’s line-up, they could have quite easily covered the door panels in plastic or artificial leather – all other manufacturers seem to do it, but not Volvo. What you’ll see and feel is carpet made from recycled materials and it’s just so different, as is the headliner, it feels like it’s made from denim jeans; It really is like nothing else out there.

The overall design is very simple and uncluttered with just seven buttons on the dashboard and to put that into perspective, the steering wheel has twice as many buttons. This is made possible by the infotainment screen that looks like a big iPad and is used to control everything from the navigation and radio to the Bluetooth and climate control systems. 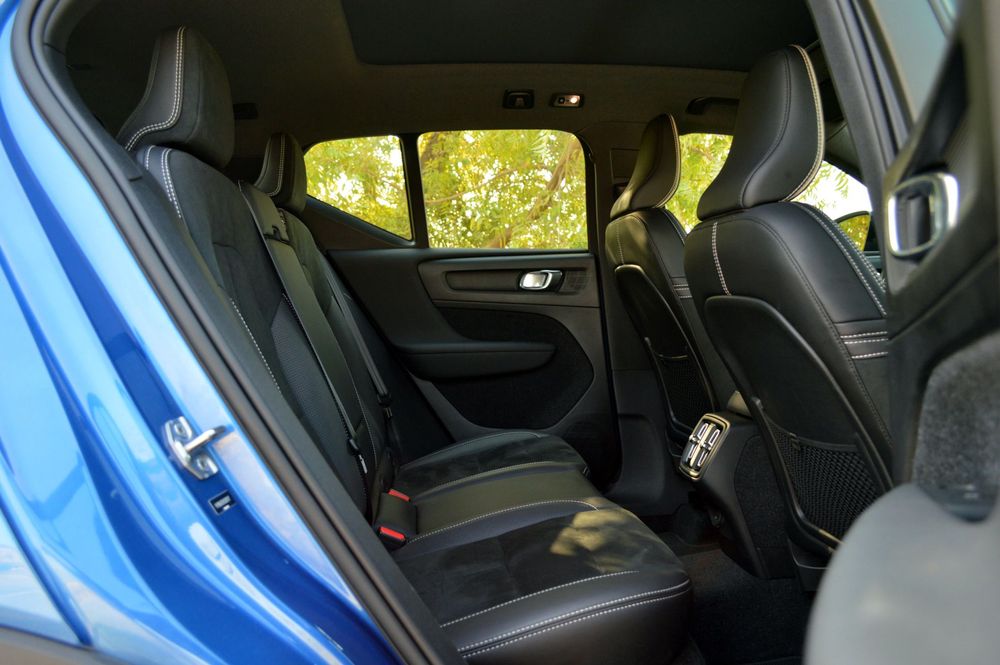 In the back, space is quite impressive for a compact SUV. There’s good headroom and legroom, rear A/C vents, and a charging outlet too. The seats are extremely comfortable and supportive despite not being able to slide or recline. A part of me says Volvo probably didn’t want people messing around with the ideal seating position they worked so hard to achieve and that’s why they skipped on offering those controls. 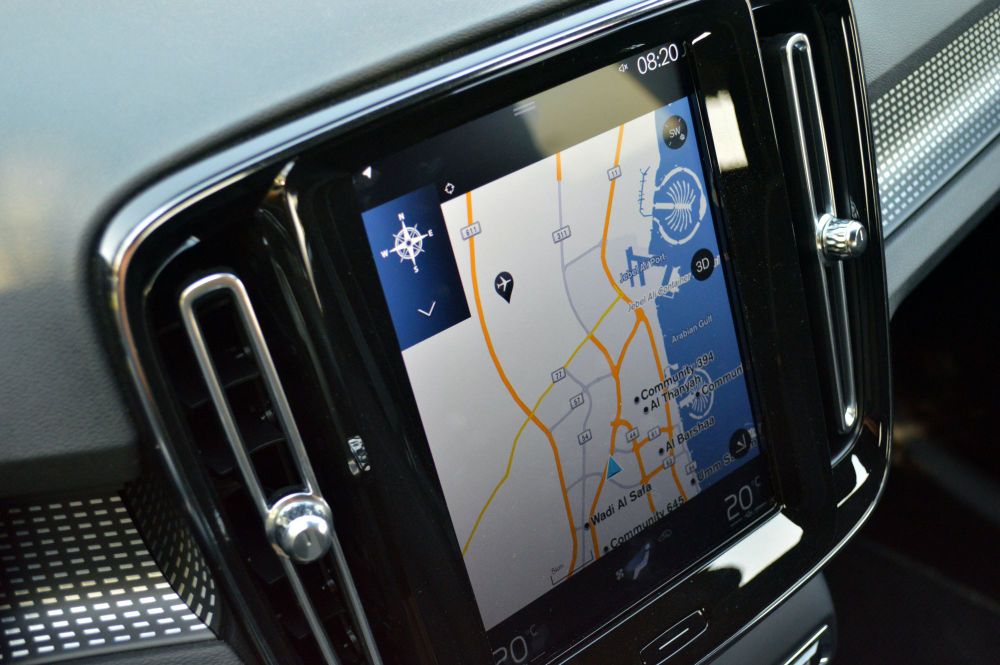 Just as innovative as its design and use of materials are the features on the XC40. Now if you recollect, I mentioned earlier that Volvo had got rid of the speakers in the door panels and what they’ve been replaced with is an air ventilated woofer behind the dashboard. Just like the A/C system, the air ventilated woofer pushes sound waves through the cabin and makes for an amazing 360-degree experience with 8 speakers.

Speaking of a 360-degree experience, the XC40 does come with an Around View Monitor to give you a birds-eye view when parking, but unlike other cars fitted with this system, it allows you to zoom in on one of the four cameras individually to make sure you don’t rub the front bumper over a pavement or scratch the gorgeous 21-inch wheels while parking.

In terms of safety, the XC40 is armed with multiple airbags, traction and stability control systems and many more aids, it’s a Volvo after all. But its coolest safety feature is referred to as City Safe – it is a bunch of sensors that constantly scan the road ahead and work as an extra pair of eyes. If you don’t happen to brake in time and the car senses a crash, it automatically brakes for you. 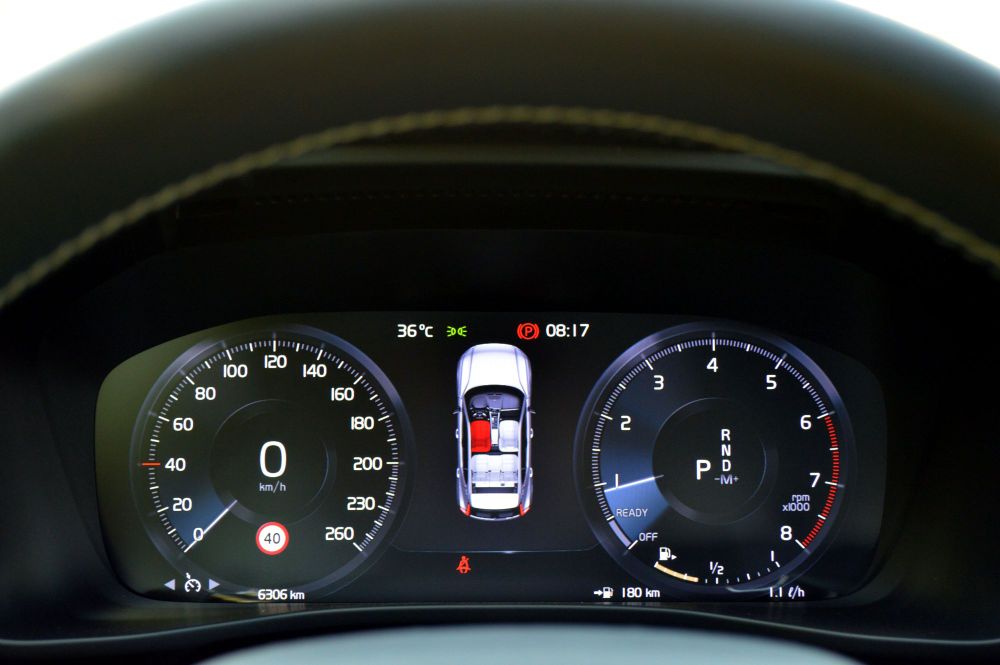 Powering the XC40 T5 is a 2.0-liter turbocharged 4-cylinder engine that produces 250 horsepower and 350 Nm of torque. Being the more powerful of two available units, the T5 is the one to get if you enjoy your speed and performance. You’ll be happy to know that the XC40 is also more powerful than all its German rivals.

Out on the road, the XC40 handles like a hot hatch. Its small dimensions and All-Wheel-Drive setup allow it to take corners at high speeds without much body roll. For the tamer drivers, the XC40 is still an enjoyable experience with the 8-speed automatic transmission shifting through gears smoothly and keeping the RPM needle below the 2,000 mark when cruising at highway speeds. 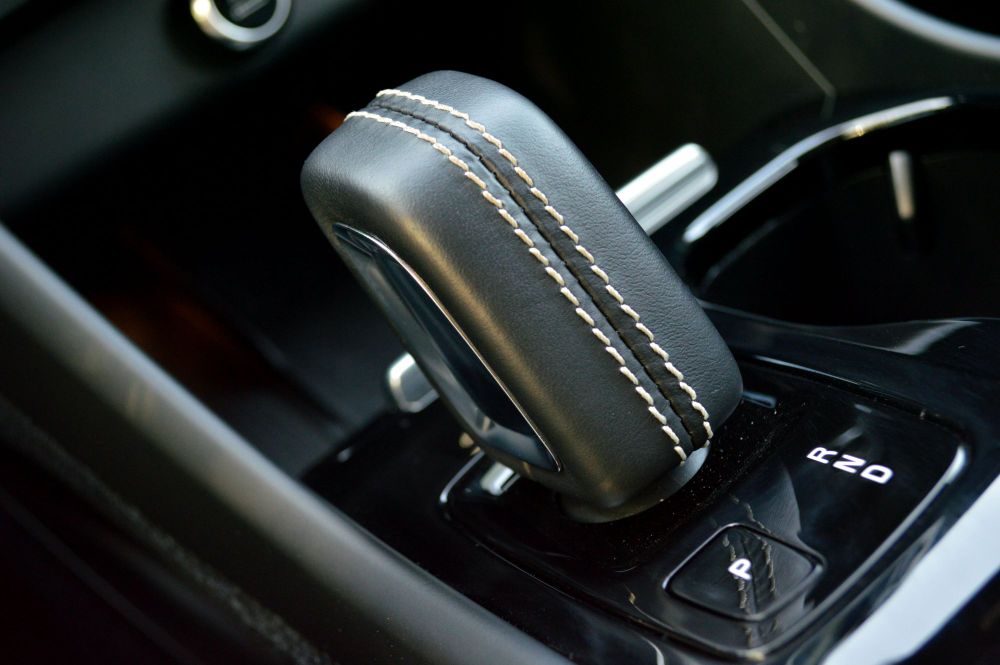 Being a city car, the XC40 is relatively fuel efficient, averaging 7.7-liters / 100km. To tackle changing conditions, it is also fitted with five drive modes: Individual, Comfort, Eco, Dynamic, and Off-Road with the last one limited to a top speed of 40km/h, which is enough because of its big wheels and low ground clearance. Cross 40km/h and the XC40 will revert to its default ‘Comfort’ mode. 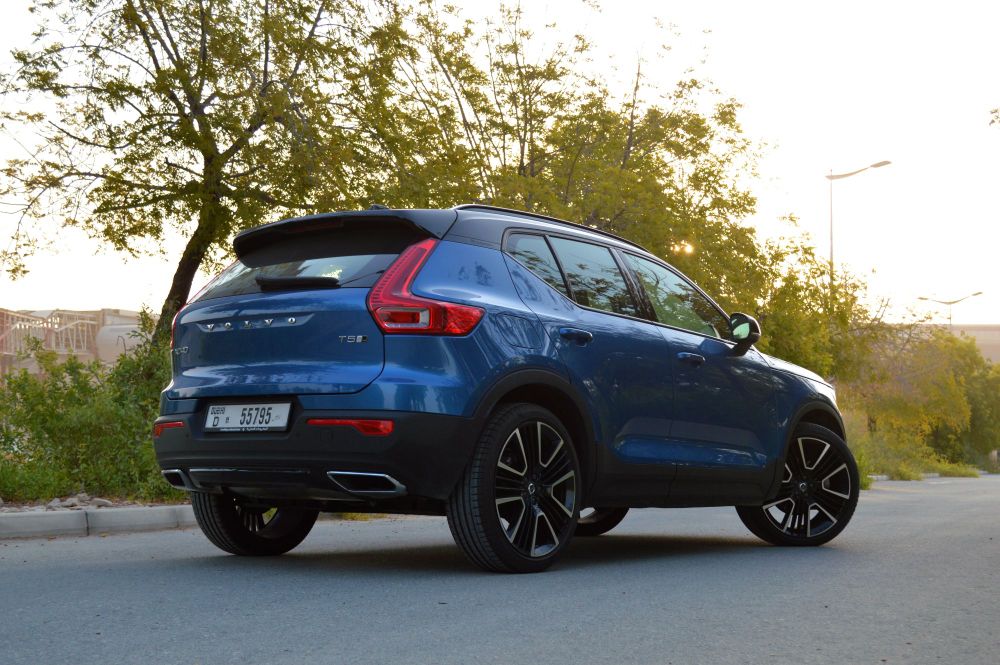 If you’ve read this far, then I’m sure you’re wondering how much the beautiful XC40 R-Design costs. At 174,900 Dirhams it isn’t cheap, but then again, neither are any of its German rivals. If you ask me, it’s a simple choice. Wouldn’t you want a car that’s unlike anything else out there, with an air ventilated woofer, recycled carpet on the door panels, and a speed camera detector? I know I would…