For ages, high performance cars catered to a niche segment which was tapped by only a few fortunate nabobs who sought the thrill of harnessing those hundreds of Italian or German horses and quench their adrenaline needs. However, some manufacturers were surely harkening to us as smaller, bantamweight and extremely powerful cars that sat 5 adults in comfort heralded the market for a price people could shed without beads of perspiration having to make an appearance on their foreheads.

While we have seen Ford and Volkswagen making gigantic leaps in this segment with cars such as the Fiesta ST, Focus ST and the Polo GT TSI and the Golf R, respectively, an automaker which might have been late to the party but made sure it was worth is Hyundai which with its ‘N’ brand of vehicles has been doing wonders sprucing up its cars with mind-blowing power and torque outputs. Recently, its latest offering, the Elantra N made its global debut and on the face of it, it would be safe to assert, there’s good news for us petrolheads. 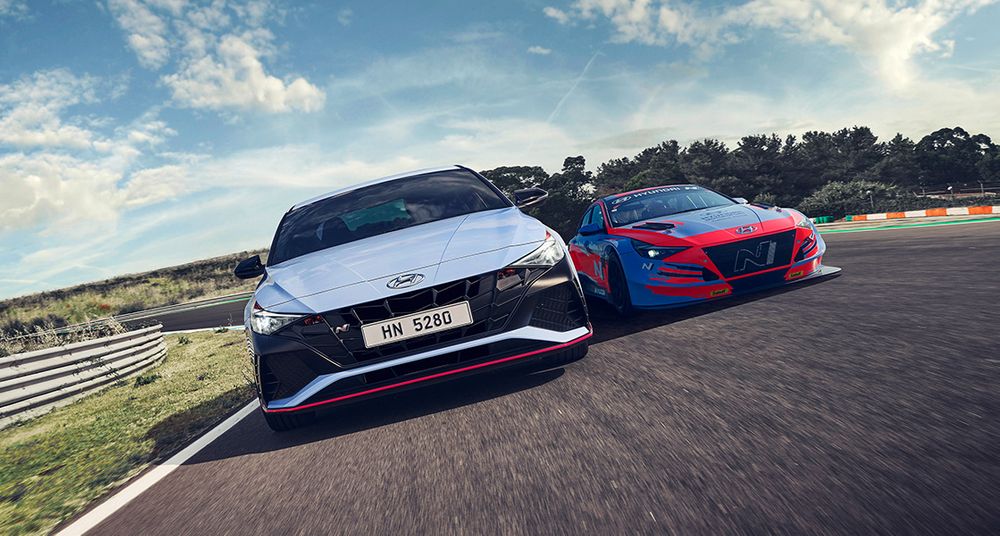 The Elantra N warps the already aggressive fascia of the standard Elantra and receives some muscular elements on the front such as a new splitter with a red strip adorning it, bigger air intakes of a boomerang shape and a blackened ‘cascading’ grille with the ‘N’ insignia on it.

To make for an imposing presence, the side profile witnesses a sharp oblique crease running through the doors, glossy black wing mirrors and 245-section tyres surrounding the 19” rims that support high speed on the cambers. Interestingly, this is the first N model to come with 245-section tyres. To add to its visual splendour are red brake callipers and lining on the side which contribute towards its sporty appeal.

However, it is the rear that gathers attention instantly with a boot-mounted spoiler, a portly boot, dual functional exhausts and a shark-fin antenna which has become a norm in the modern sedans. 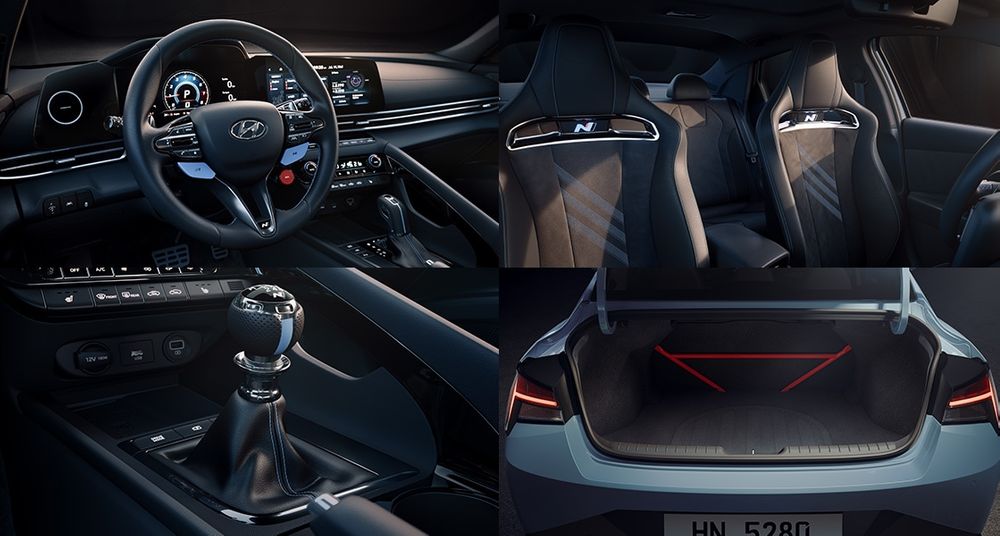 One of the salient features of the new Elantra is its posh interior which doesn’t shy away from emanating opulence unlike the rather basic layout of the previous gen Elantra. The seats feature reinforced bolsters to corroborate the driver’s back and create a snug seating position for him. If this feels too rife, Hyundai also provides an optional N bucket seat with illuminated N logo which is lower by 10 mm and is thinner by 50 mm vis-à-vis the standard configuration for a more supportive seating position.

Taking centre stage, is a UX interface for the infotainment system which provides high quality graphics and seeks to curate an experience similar to cruising on a race circuit. The infotainment system also comes with a lap timer feature which not only keeps a record of the lap timings, but also gives real-time location of the driver thereby, eliminating the need for more professional techy devices. In the age of connectivity, the Elantra N makes use of the ‘BlueLink’ technology to pair smartphones with the car and access features on the go. Consolidating with these, features such as G-Force, RPM, instantaneous torque consumption and lap times are available to evaluate the progress by the driver himself. 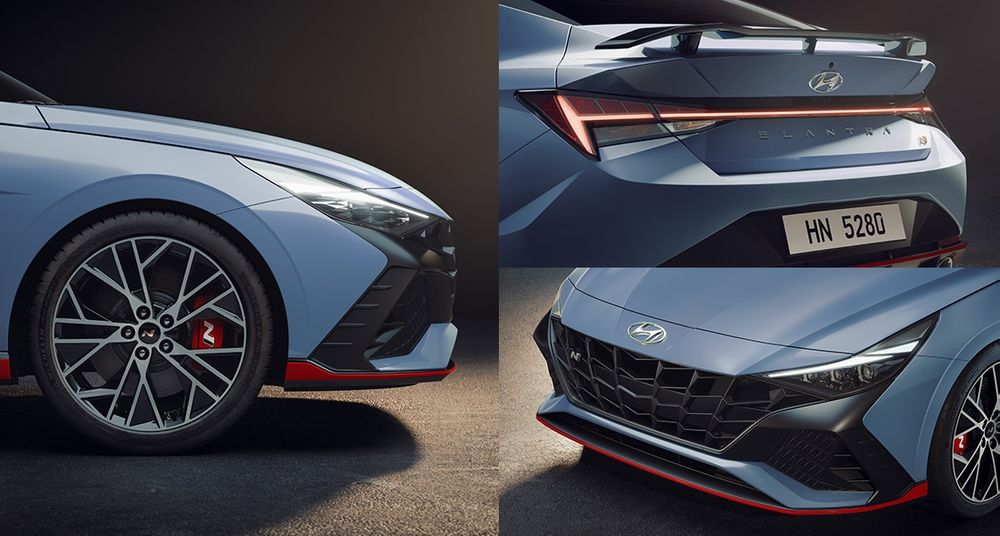 Breathing life into the Elantra N is a 2.0-litre flat power mill which produces 280 hp. However, worth highlighting is the 400 Nm of torque which aids the car in progressing from nought to 100 Km/h in a stint of just 5.3 seconds. There are two drive modes to enhance the driving experience. All this colossal power and torque is channelled via an 8-speed wet automatic transmission.

But that’s not the main party trick. It’s the N Grin Shift (NGS) switch will increases the power output to 290 hp temporarily for 20 seconds to provide incessant level of thrill and frolic from behind the wheel. As fast as the Elantra is, it also features several mechanical aids to make sure it never goes out of control. Its N Corner Carving Differential prevents the car from skidding on a wet surface. The exhaust valves can be opened and closed when required to hear the loudest sound possible which would be music to the ears. 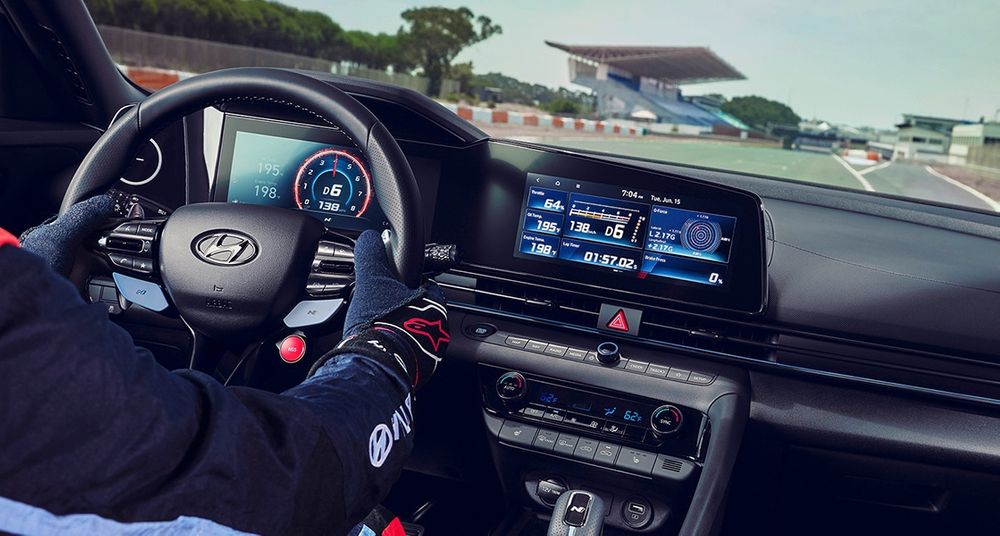 In the most powerful and full-blown ‘N’ iteration, the Elantra now has the potential to become a consummate enthusiast’s choice over the Civic Type-R and the VW Golf R as well. In its unique blue and red combination, it looks the part, has the power to infuse excitement and its 4 door silhouette allows it to be used as a practical everyday cruising machine as well. However, it’s got pretty formidable and reputed competition to quash which might not be an easy task despite its extensive list of pros.