One of the biggest icons of the automotive industry recently celebrated its 50th anniversary. Yes, the Mustang - the American equivalent of the Prancing Horse - has completed the golden jubilee since its inception as the definition of an American 'muscle' car. It has become the first choice of any customer looking to buy an American sports car. So, it is quite obviously an uphill battle for Ford to keep its premier model 'fresh'. Hence, let's look at the all-new Mustang in detail. 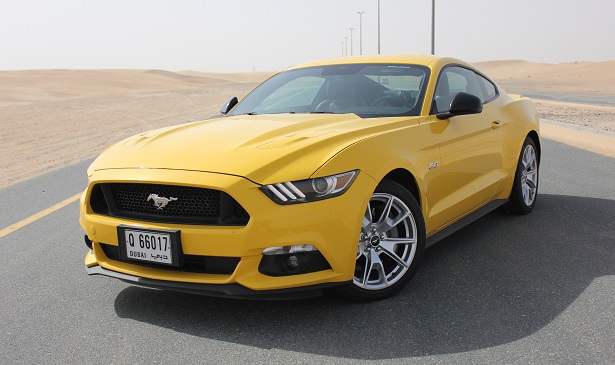 To start off, I must say, it is a genius marketing move to launch a totally new car to celebrate 50 years - instead of creating a special edition model with badges all over. On top of that, I got to drive the special launch edition - in Yellow. So things were looking promising all round. The story continued once I had a closer look at the car. They have really made the perfect Mustang since the 1967 model. It finally looks pretty without loosing the badass image. The new Mustang is based on the older shape and what Ford has done is make it wider and sleeker thus removing the whole squarish image as Mustang is supposed to be a sprinter and not something you would race in a destruction derby. I applaud the fact that they held onto the retro look and made it even better. It will be very difficult for Ford to beat this design as this is simply beautiful from every angle - that includes the color coded diffusers as well which I believe is a nice touch. Overall, no complaints at all. 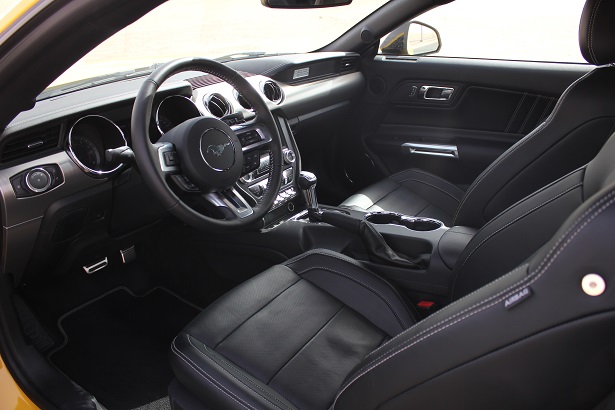 Once you take a peek inside the car, you will instantly feel retro and that was the idea. Ford pays homage to the original icon but keeps all the basic modern amenities. The interior is not European so don't don't be alarmed if there is a lack in luxury. It is a pure blue-collar American car so expect a mix of plastic and leather all over. And, it is definitely not a deal breaker given the price. The new Mustang has all the features considered must-have by today's standards but the option I liked the most is the ability to change the mood lighting - that's Merc territory. You can set the interior lighting as well as the instrument panel lighting to different colors. Other than that, the MyFord Touch system is another nice touch to keep all Ford vehicles in sync. Material quality has been improved overall and the interior doesn't feel flimsy with plastic-ky sounds.

Coming to the overall space, well, you will be pleased to know that the new Mustang is spacious for 2 adults, though, I can't say the same for the rear passengers. There is space for them as they won't be feeling cramped but bear in mind this is a sports car and not a GT cruiser. The boot space, however, is considerably big for a sports coupe, something which is graciously welcomed.

Lastly, the visibility; the new Mustang has better visibility all round compared to its competitors i.e Camaro & Challenger. However, it also suffers due to the rear pillars - something which can be avoided by using the optional Blind Spot Detection system.

Overall, it is a touch and go in the interior department and has scope for improvement. 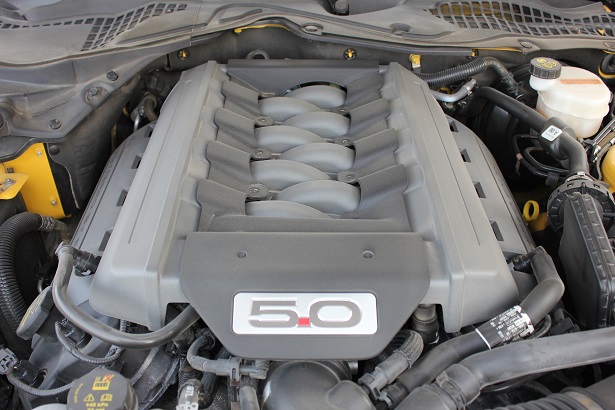 This is the first time the American brute has swayed off from its roots and went for an independent rear suspension - something synonymous with European cars. So, it was obviously the no. 1 priority while testing the car. And, I must say, I am impressed. The car doesn't feel American at all. Bravo Ford! That is the best compliment I can give to an American car. The new Mustang really feels like a 2 door sports car in the corners. Sure, the electric steering doesn't give the purists the road feel one would expect but the overall ride now feels refined - a term not used with American vehicles often. I hardly felt the lumps and bumps on the road and there was little body roll overall.

In terms of performance, well, it is a slight upgrade. I was glad I got my hands on the proper 5.0 GT and not the EcoBoost. Even though, the 2.3L is snippy and fuel efficient but if you really want a Mustang, you have got to drive the V8 - as it is the de facto powertrain in a muscle car. The refreshed engine now produces 435 BHP and 540 Nm of torque. This helps the car to propel from 0-100 km/h in 6.0s in our test run - not bad considering this is not a Shelby. Braking on the other hand is pleasant without any jerks and the car comes to a halt from 100 in 3.1s. The acceleration is smooth but the 6-speed transmission requires some tuning as there is lag in shifting. If you are bothered about fuel efficiency then 16.3 l/100 km is not bad at all for a thirsty V8.

Overall, it was a satisfying driving experience for me and I would love to test the Shelby once it is available. 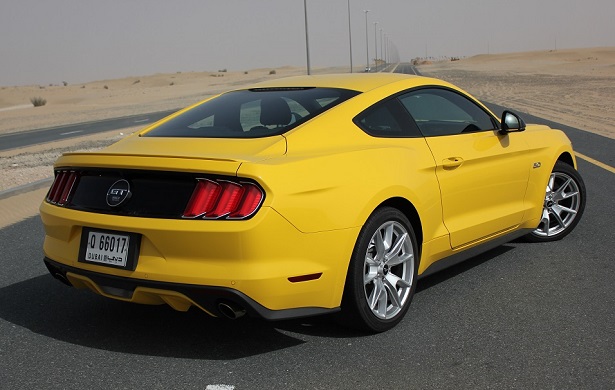 Not much to say except that Ford has created the greatest Mustang ever. Period.