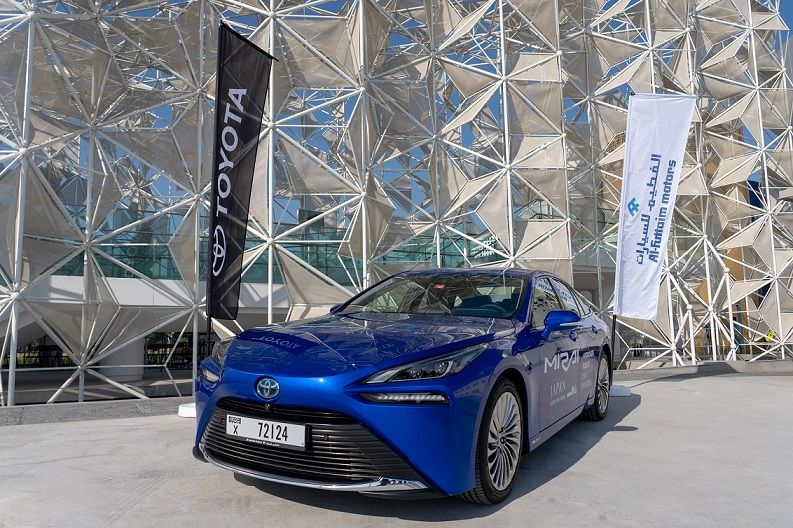 If you have grown tired of incessantly perusing about electric cars, it is quite plausible that you might want to hold on to this article as it describes the celebration of one of the most path-breaking EV inventions that has recently made its UAE debut at the venue which is brimming with crowd that is understanding how well the distinct cultures have showcased themselves at the Expo 2020 Dubai pavilions and demonstrate the spirit of integrity.

It is one of the world’s first Hydrogen Fuel-Cell Electric Vehicles which has the vigour to flex itself for a claimed range of 650 km and also possesses the skill to recharge itself within a stint of 6 min! In case you’re already surrounded with awe, let us not be furtive further and spill the news. The Toyota Mirai has debuted at the Japan Pavilion of Expo 2020 Dubai and unravels several secrets which might astound one.

The 100% electric vehicle synergises hydrogen and oxygen to conjure up electricity using an on-board fuel cell which powers the motor for propulsion leaving only water as a by-product. Apart from reaffirming Toyota’s aim of achieving carbon neutrality and bringing in best-in-class efficiency and zero emissions, it outshines everything else with its charging duration of a claimed 3 to 5 min. It whole-heartedly abides by the virtues of sustainability and redefines the standards of an electric car. 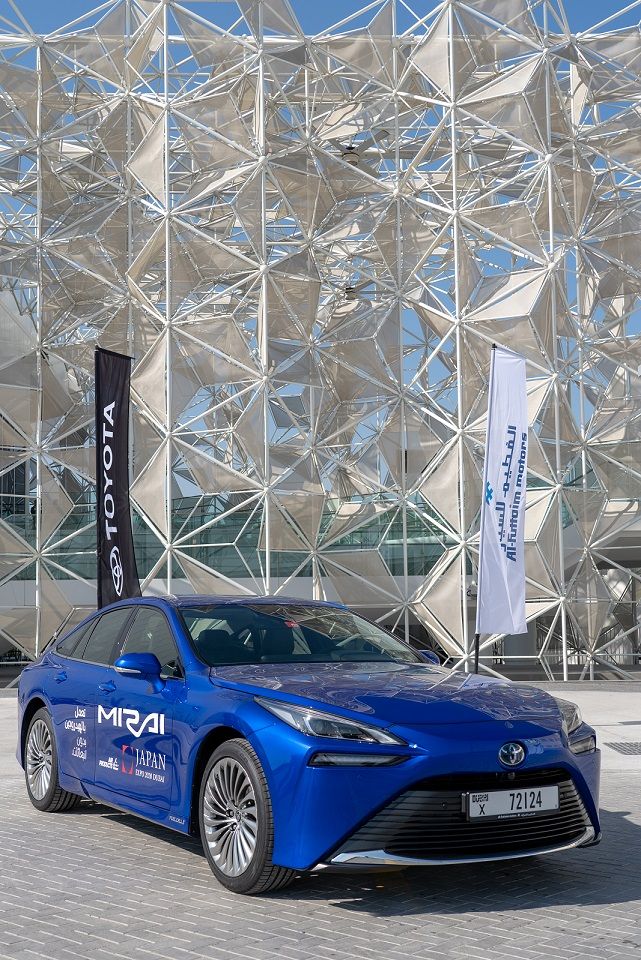 The car was unveiled at the Japan Pavilion in line with a special ceremony which provides a striking mobility solution for the staff. Being marketed as a sports-luxury FCEV, it is by far, the best testament to Toyota’s indulgence and prosperity in hybrid, electric and such radical vehicles where it has been taking steps to shape the future since 1992.

Regarding its performance quotient, it generates 134 kW of torque to lunge the vehicle forward with a solid thrust accelerating from 40 km/h to 70 km/h in a trifle, 2.8 seconds.

In addition to the showcase of this car, the Japan Pavilion also brings to the visitors, paragons of how other nationalities and cultures have amalgamated with its typical Japanese culture and sports traditional Arabesque and Japanese asanoha patterns to lead to the fruition of artistry that reverberates traditional Japanese paper-folding art of origami.

“It is a great honor for the Toyota Mirai to be selected as the official car of the Japan Pavilion at this landmark global gathering. The Expo 2020 theme of ‘Connecting Minds, Creating the Future’ centers around sustainability, mobility, and opportunity, all of which are aligned with Toyota’s vision of a better world. This also comes in line with the UAE’s ‘Net Zero by 2050’ strategic initiative, which aims to create positive environmental impact,” said Kei Fujita, Chief Representative, Middle East and Central Asia Representative ‎Office, Toyota Motor Corporation. Here in the region, there has been strong interest in the potential of hydrogen as a clean energy source, which makes the Mirai’s participation especially relevant. This is one of the many diverse technologies we have been developing as part of our journey to achieve a carbon-neutral society with greater mobility for all.”

Tomiyasu Nakamura, Commissioner General, Japan Section at the Japan Pavilion, commented: “We are delighted to be here in Dubai and showcase Japanese solutions that build on innovative ideas to create a better tomorrow. Mirai means ‘future’ in Japanese, a name that resonates with the theme of our Pavilion as we are aiming to build a safer, greener, and easier future for all. To achieve this, we must first consider the challenges faced by our country as a lens through which to examine global issues and contemplate what is required to move forward. We are pleased to have Toyota on board as we embark on this inspiring journey and look forward to exploring the exciting possibilities an event of this magnitude creates by bringing people together in a global celebration of human ingenuity.”