This is the Tesla Model X P100D, it’s the fastest, most capable, and most expensive Tesla currently on sale. For those of you who followed our coverage of the recently held Global EVRT – the road trip that saw us drive 2,500km across UAE and Oman in an Electric Vehicle – would have seen that I had a brief encounter with the Model X, but today we’re going to dig beneath the surface and find out if it’s worth its 483,000 Dirham price tag. 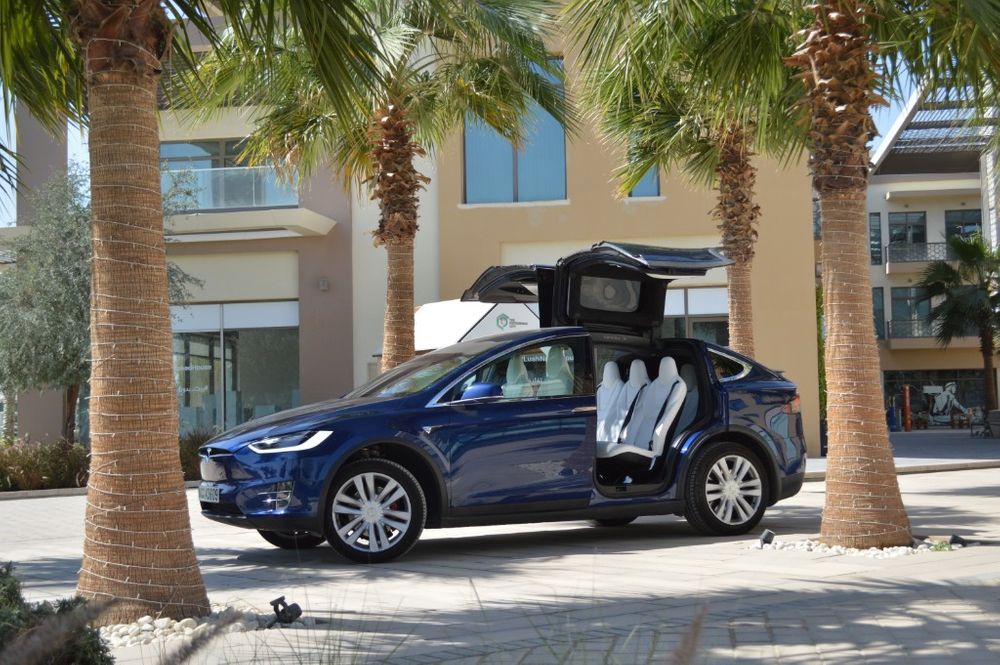 Now although the Model X looks like Model S with a swollen roof, it does stand out from the crowd. What’s important is that it has been done keeping function over form. For instance, the roof offers improved headroom to those in the second row and the smooth lines along the exterior make the Model X one of the most (if not the most) aerodynamic SUV currently on sale.

Being an electric car, it does not have traditional design elements such as a large grille in the front or an exhaust pipe at the back. What you do get, is tons of storage space. This front trunk (or frunk as it’s called) offers 187-liters of space which is enough to fit your weekend golf bag. For larger items, the boot offers a whopping 2,180-liters with the last row folded flat.

Before moving inside, I’d like to spend some time talking about the key because it’s unlike anything else out there. It’s shaped like the car itself and it’s got 5 buttons hidden very discreetly. Tap the buttons on the side and the beautiful falcon doors open up. In fact, not only are they beautiful but they’re also intelligent. They need just 1 foot of space and have plenty of sensors that stop them from hitting the wall or car that’s parked besides you. 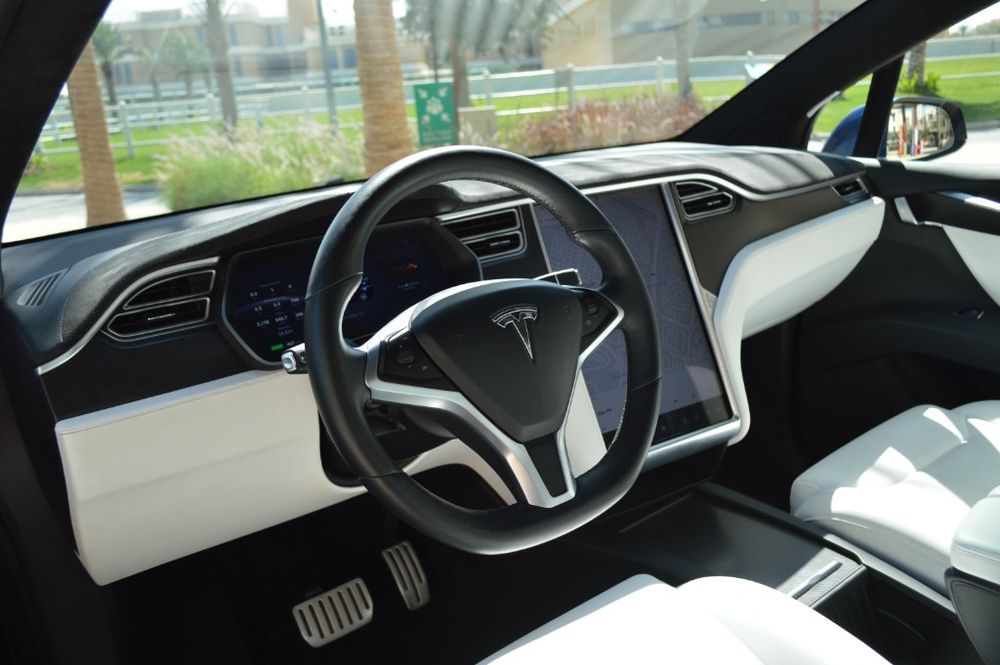 Now adding to the fact that the Model X is the most capable and most expensive Tesla currently on sale, it’s also the most spacious Tesla currently on sale. It’s got 7-seats and each of those 7 seats are large enough to fit average-sized adults. Before the seats, however, it’s the windshield that will blow you away. It’s huge! It’s like having your windshield connected to your sunroof and just in case that wasn’t cool enough, there’s also magnetic sun visors!

Although Tesla has mastered the art of minimalism and squeezed every function possible onto the large vertical screen along the dashboard, not all is perfect. There’s white leather on the seats and carbon fiber trim along the dashboard and door panels, but the overall quality and finish of the cabin is not up to par with vehicles in its price range. 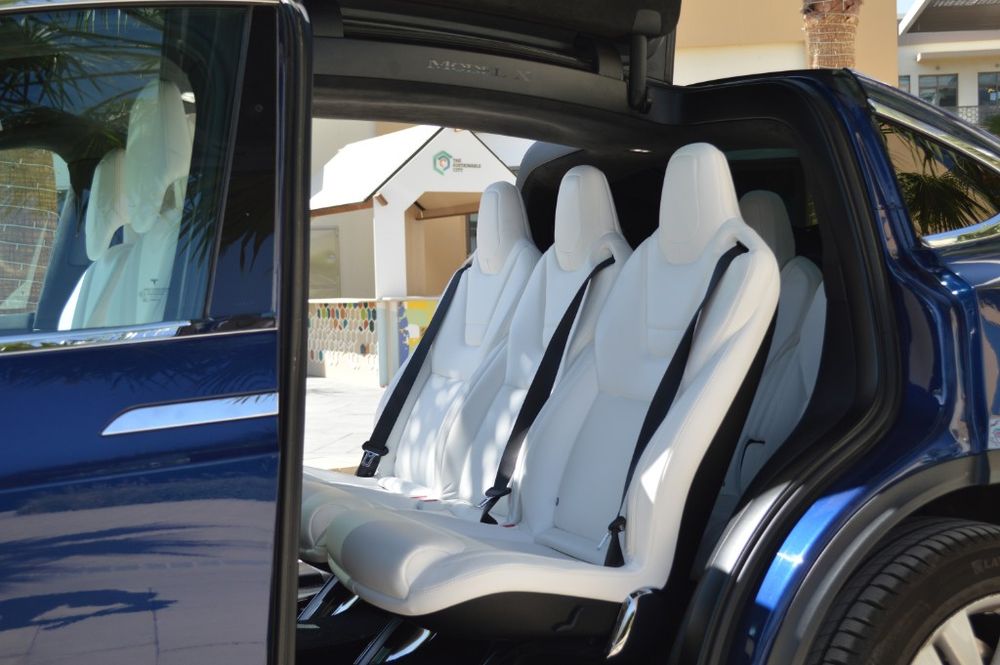 In the second row, the benefit of the bulbous roof is quickly visible. There’s plenty of headroom and those on the sides get their own private sunroof of sorts. Speaking of the seats on the sides, they are controlled electronically from the buttons on the seats itself while the one in the middle is controlled from the screen upfront.

The last row also offers enough space to accommodate adults with lots of headroom and legroom, and just to make sure your last row passengers are comfortable, there’s cupholders and two A/C vents. 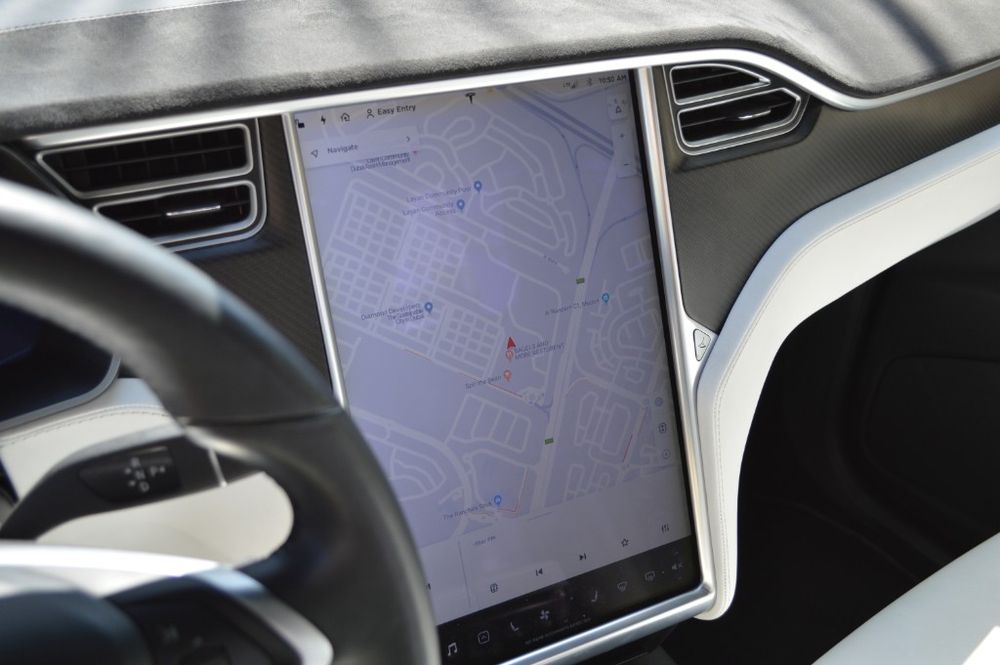 On the feature front, the Tesla Model X has all the usual tech such as LED lights, built-in navigation, and exceptional mobile connectivity but let’s leave the basics aside and highlight the stuff that really sets the Model X apart.

Firstly, this car has an active data connection (just like your phone) meaning you can browse the web, get live traffic information, and listen to online radio. But the best part about the active data connection is that it gets over the air updates to keep your car up-to-date. Tesla releases an update, you start your car the next morning and BOOM, an all-new feature that wasn’t there the night before!

In terms of self-driving tech, the Model X has 8 cameras, 12 sensors, and a front facing radar that detects cars, buses, trucks, pedestrians, and possibly pets too. Technically, it can drive itself, the hardware is already present, but because of the laws in many countries it is unable to do so. Speaking of intelligent tech, the Model X also knows when it approaches a Tesla charger and automatically opens its charging port. 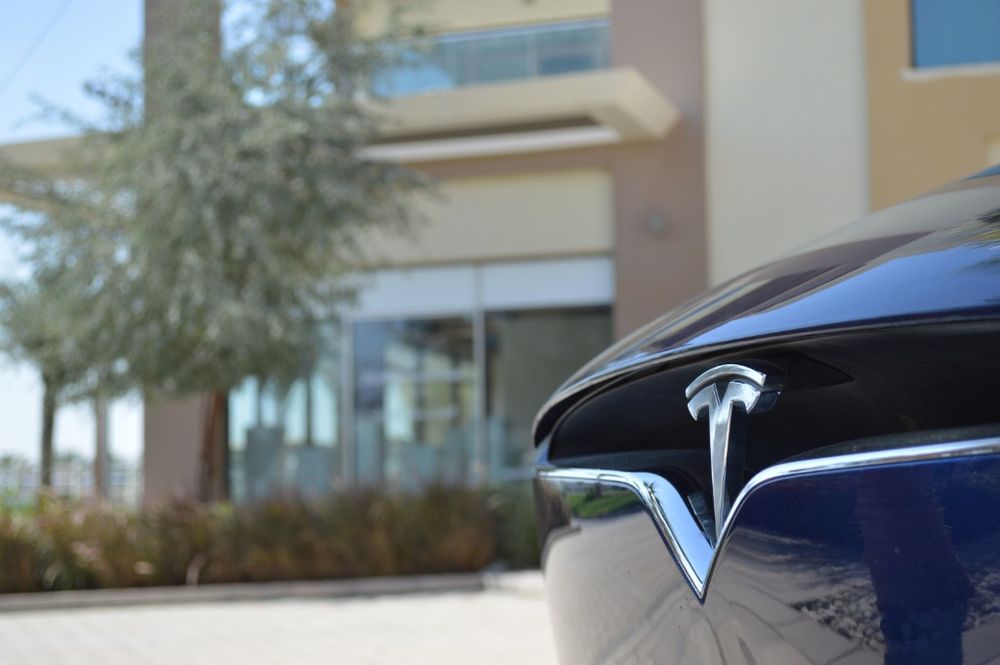 Now since the Tesla Model X hasn’t got an engine under the hood, it drives quite differently to a petrol-powered car. For starters, it’s a lot quieter and that can be perceived as being more luxurious. Also, it is the way in which the power is delivered that sets the Model X apart, it’s instant with zero lag or hesitation, and can be a lot if you’re not ready for it.

The dual motor set-up that the P100D is armed with, produces 762 horsepower and more than 1,000 Nm of torque. Those are insane figures. Those are figures that allow it to accelerate from 0 – 100 km/h faster than a Ferrari 488 or a Corvette Z06 and just a reminder, this is a 7-seater SUV we’re talking about.

Top speed stands at 250 km/h but when you do drive it sensibly, the Model X will deliver over 500 kilometers on a single charge. That is made possibly with regenerative braking that charges the battery as you drive along and an automatically adjusting ride height that drops the vehicle at highway speeds to increase aerodynamic efficiency. 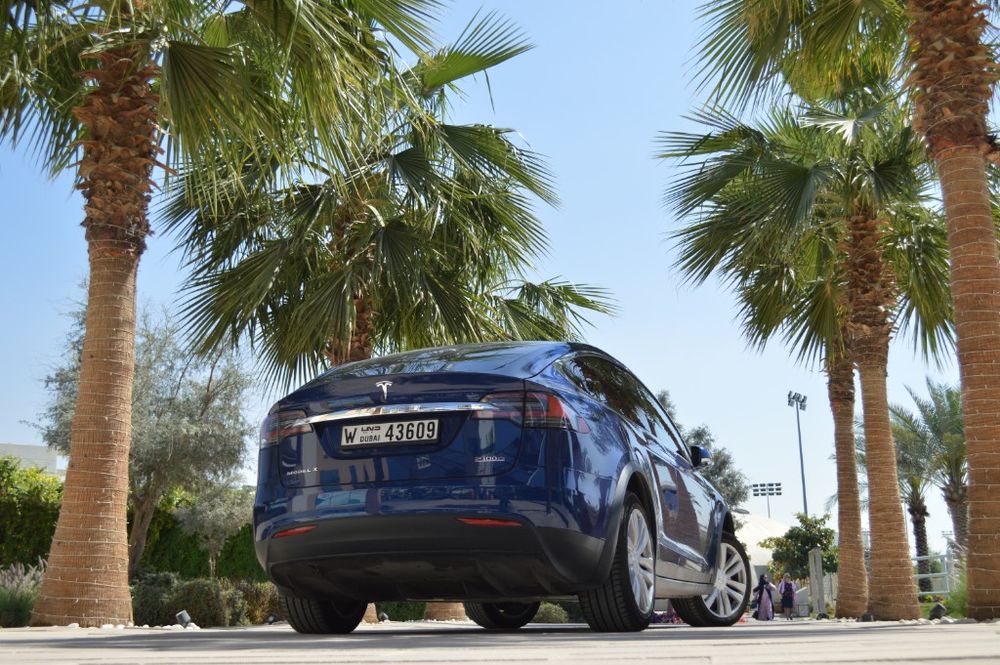 Comparing the Tesla Model X P100D to a petrol-powered car is perhaps a little unfair. In fact, because it’s such a great all-rounder, it brings us closer to the day when people will buy electric vehicles not because they want to make a statement or save the environment but because they simply want the better car. For those who do wish to adopt the Tesla lifestyle, it’s worth noting that the Model X comes with an 8-year unlimited kilometer warranty on the battery and that the brand recycles up to 97% of used batteries.