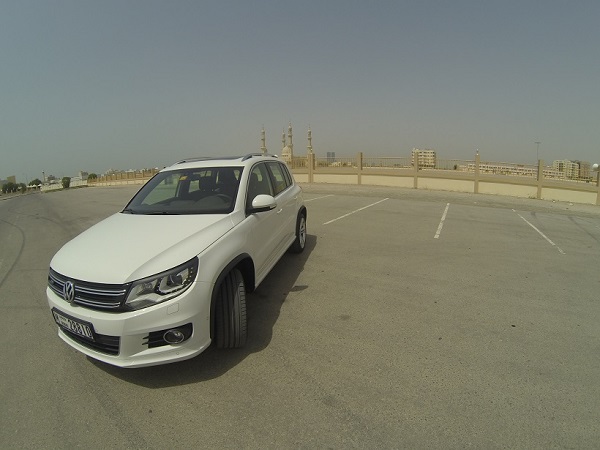 Volkswagen has always been selective about the models that they bring forward onto the market. They have always concentrated about the middle market with cars such as the Golf GTI and the Passat and the SUV the Touareg.  When it comes to the recently introduced Tiguan is the product of crossing the Golf GTI with the Touareg.  The Tiguan has the GTI’s engine and cabin and a shrunken Touareg body. Although it may sound kind of weird, but this is the best way to describe the Tiguan.

The model that we received was the “R-Line” which means it sports the “R” body kit which includes a spoiler, special bumpers and side skirts, R-Line 5-spoke wheels, and not to forget the “R-Line” badge that is strategically placed within the grill. The car styling has been simplified to perfection. Nothing too flashy or out of the ordinary but at the same time it’s not a metal box on wheels. The thing that is the most noticeable in the Tiguan is the LED day-running lights; which give the car a special sporty look.

To be put in simple terms, the Tiguan rides and behaves almost exactly the same as a Golf GTI. It has somewhat of a firm ride, where you can feel the unevenness of the roads and the smallest potholes will definitely be felt. The handling of the Tiguan is rather exceptional for a car that falls in that category, it can tackle corners as if they were nothing, and body roll is minimal thanks to the “R-Line” suspension kit. Overall the handling and the way that the Tiguan carries itself is very good. The one small comment that can be made on the Tiguan’s ride quality is that it has a somewhat large turning radius. A car that is quite small when compared to others, a person would expect that the car would have a smaller turning radius which would make maneuvering it a lot easier. In terms of performance, the Tiguan delivers in almost every area. The acceleration of the Tiguan is very good for an SUV; it’s nice and nimble and can accelerate up to the desired speed without any issue. This is all thanks to the 2.0 Turbo charged engine that spits out 200 horsepower and every one of those horses is used efficiently. The Tiguan’s breaks could have been better, it somewhat squirms to a stop with a small shimmy in the steering wheel. When it comes to fuel economy, the Tiguan handles itself rather well when compared to its competitor, the Land Rover LR2. Also, the steering has less feedback which provides it with sporty nimbleness. 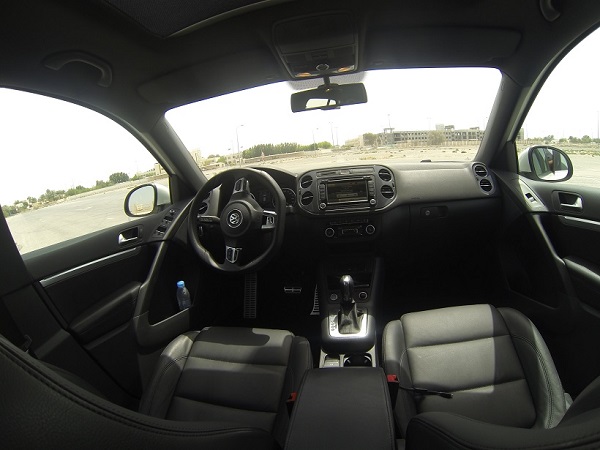 From the outside the Tiguan seems small and you would think that you will feel crammed in there, but when you step into the driver’s seat, you are surprised with the abundant amount of room that there is! The interior of the Tiguan is somewhat ruined by the steering wheel, which is that of a golf GTI. But I guess this is part of the R-Line package. This package also includes embroidered “R” symbols in the headrest and on the bottom of the steering wheel.  The quality of the interior is top notch German made, the seats are very comfortable even for a guy my size.

The Tiguan boasts a number of gadgetry that will keep anyone busy for a good half hour. Some work better than others, but they are all there. For starters, the sound system, you either love it or hate it, there is no half way. The reason for this is because when the volume level is up half way, the sound is extremely loud and the bass thumps like no tomorrow, turn it up a level or two and the dreaded audio noise shows up and the car interior starts to rattle. The touch screen is very clear and easy to use, except when it comes to the navigation, the entire time that I had the car (3 days) I could not change the language of the map from Arabic to English, also some very important locations are missing from this system, such as Dubai Airport Free Zone. Then again, it could be a settings issue that I could not figure out. The gadget that stands out in this car the most is the “VW Park Assist” where you press a button and you drive along the row that you want to park in at a speed of no more than 20 KM/H, and the car will measure the spaces its senses and will alert you when a space is big enough. From there the car takes over the steering, all you have to do is operate the break and the shifting. The park assist system works spectacularly! I used it at many times and it worked flawlessly every single time. Given the fact that it’s a compact SUV, rear legroom is limited, and is made even worse by the tray tables that don’t open to a full 90 degree angle and cannot hold up an apple.  The AC of the Tiguan is very strong, which is an automatic huge plus and the size of the car reduces the blind spots which makes it a joy to drive.

The Tiguan is a very practical car. The rear folding seats with the boot space gives immense storage space for transporting almost anything, at the same time; the cabin of the car is very well put together. The car drives very well and can hold it just fine around corners or in a straight line. At a price of just above 150,000 DHS, the Tiguan is the better choice when compared to the competitor’s Land Rover LR2, as the Tiguan contains everything the Land Rover offers and even more.