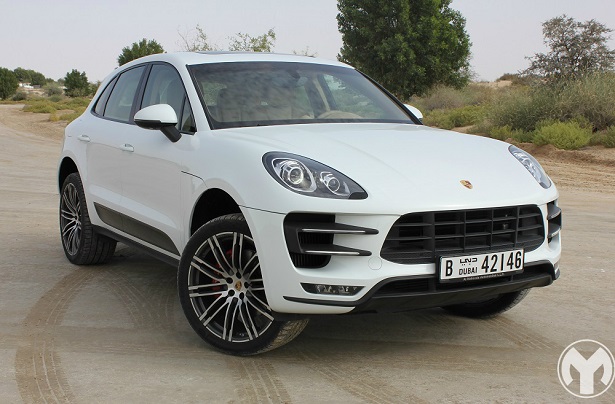 This week I got my hands on the most anticipated SUV of 2014 – the Porsche Macan. Built as the younger sibling of the mighty Cayenne (Prices of Cayenne), this new crossover is supposed to compete against the likes of BMW X3 (Prices of X3) and its distant cousin – the Audi Q5 (Prices of Q5). Billed as the fastest compact SUV in the world, the Macan Turbo has a lot to live up to. Check out the prices and specs of Macan over here. 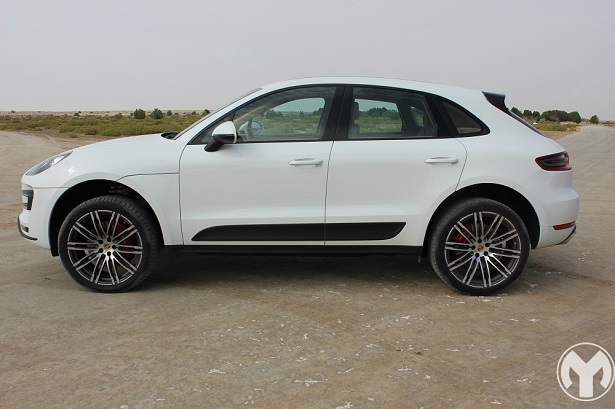 Porsche has learned from its mistakes when designing a brand new automobile. Whether it was the Cayenne or the Panamera (Prices of Panamera), the first look was never the USP. In fact, they were on the unpleasant side. However, the new Macan is like a breath of fresh air. It is nothing like you have seen before on the road, yet, it is definitely a Porsche. The front of the new Cayenne and Macan look almost the same but as you go around, you will see the difference in character. The Cayenne looks like a brute whereas the Macan is a sophisticated people carrier with nothing to prove. The rear however, can be redesigned as it looks controversial – for lack of a better term and reminds me of the Q5. The tail lamps clearly are taken from the 918 and they add character to the sporty nature of the car. Overall, understated looks with curvy design makes this crossover look more like a car than an SUV – which, in my opinion, is the right approach. 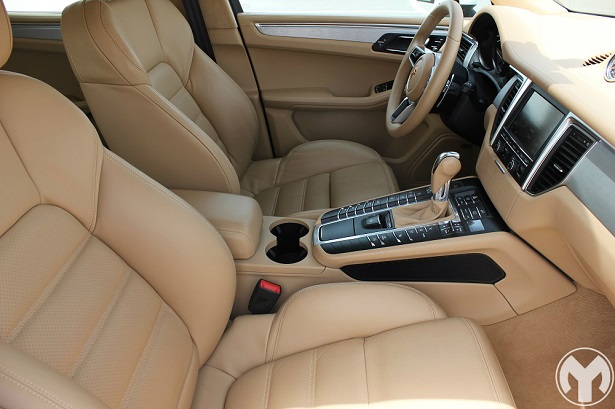 When you pay a premium, you expect a premium ride. And, that is the case with the Macan as well. The interior color might not appeal to everyone but it is definitely luxurious. Plush leather everywhere and the buttons have a nice feel to them but what I loved the most is the clock – it just stands out. It is as good as any Porsche could be. 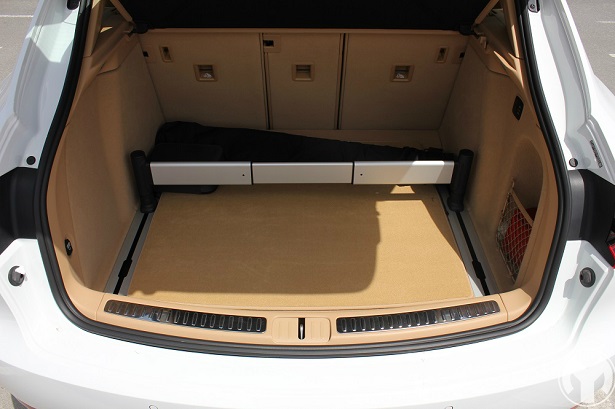 The Macan is a compact SUV. The key word is Compact. So expect some limitation in interior space. It is marketed as a 5 seater but I would advise to travel with 4 adults and 1 child as the middle seat is not comfortable for adults. On the other hand, the boot space is adequate and will satisfy any family while going on a picnic. Overall, no major complains in this department. 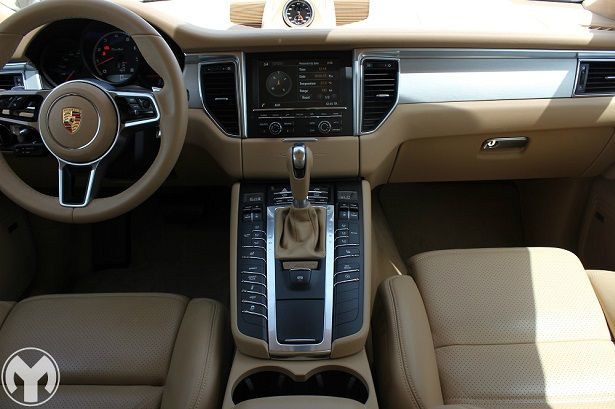 As a first-timer in a Porsche, it took me a significant amount of time understanding the layout of buttons. You are literally sitting in the cockpit of a plane. There are buttons everywhere – something which is a turn off for me but that might not be the case for everyone. So, after spending some time playing around, I realized this car has almost every feature available in premium automobiles.

With the lack of the central command unit/joystick, the screen thankfully is touch-based but navigating through menus is a tedious task. It just doesn’t come natural to me. The whole process is a mix of pressing buttons on and off screen. It was my first time so I believe the next Porsche I get to drive will be better to play around with. Overall, purely based on my first time experience, the infotainment system would be better to use with the introduction of a central command unit like the MMI in Audi. 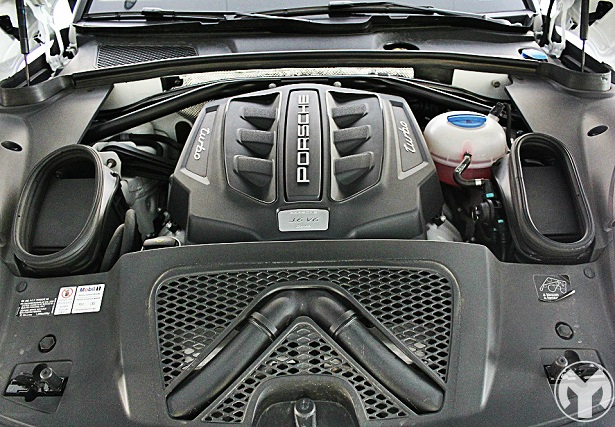 If there were any doubts rising about the car, pressing the accelerator just obliterates them. This is by far the most powerful V6 SUV I have driven. Producing 400 BHP, the Macan Turbo comes alive once you start hearing the turbo spooling up and then it just pushes you against the car seat. That feeling is quadrupled if you engage the launch control. I got a whiplash feeling every time I used launch control as the car just zips off the tarmac without any wheel spin. The Macan sprints from 0-100 in 4.8 seconds but the best I achieved was 5.2 seconds. Comparatively, a Range Rover Sport Supercharged achieves it in 5.0 seconds – and it costs 100k AED more than the Macan Turbo. Though, all this flooring did have a huge impact on the fuel economy as I was averaging around 17 liters/100km.

But, you forget all that once you drive it in manual mode. The PDK is by far the smoothest transmission ever fitted into an automobile. The shifts are crisp and you never feel the gear changing – which can be the biggest compliment from my side.

You can check out a video of it being tested UAE Dubai’s desert in this story we made a few days ago. 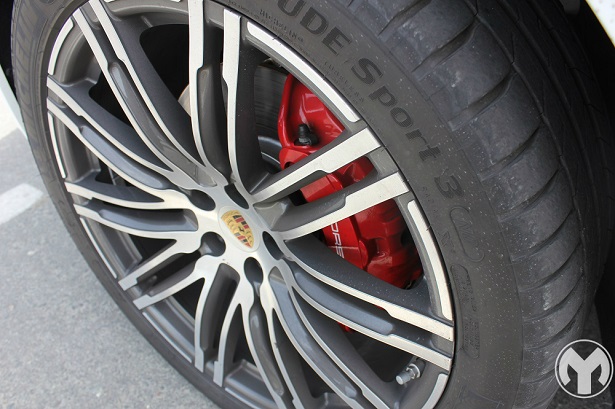 The Macan has air suspension – which might seem odd on this particular vehicle but it is very useful in corners and offroading. This gives the car split-personality. Lowering the suspension makes a lot of difference while cornering – although, there is that significant amount of body roll expected from an SUV but given the size and weight, the handling is a charm. Coming to the offroading bit, well, don’t expect it to tackle dunes or rocky terrains like a Jeep Wrangler (Prices of Wrangler). It is a crossover and expect it to behave like one while offroading. So, no complains here. 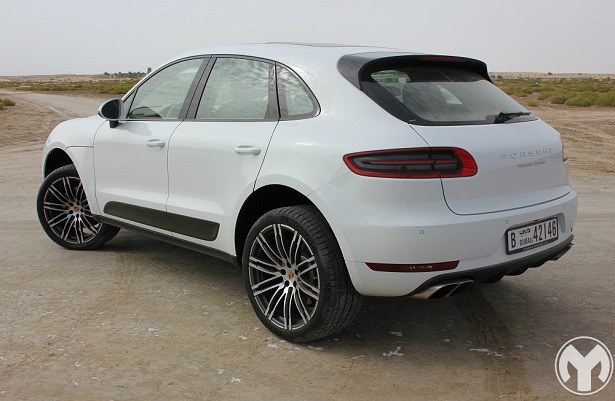 The Macan Turbo is the fastest crossover ever built but that does result in a heavy price tag – 350K AED. The car I drove had 30K worth of extras. This makes me wonder. The biggest competitor to the Macan Turbo is not the X3 or the Q5 but its bigger brother Cayenne. For this price tag, you can have the Cayenne GTS – the hardcore version of the Cayenne (for 370K) – with more space and a mean looking face. Also, the Cayenne GTS has 440 BHP, if that matters. Hmm, something to ponder upon, right?

The Macan Turbo is available across all Al Nabooda Automobile showrooms.