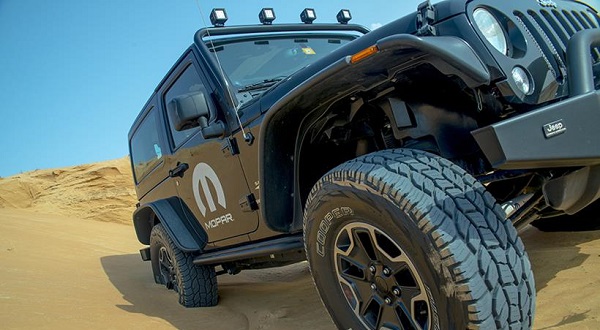 The Jeep Wrangler is a direct descendant of the Willys Jeep used during the Second World War. A car that was robust and could handle many an off road challenge. A true heavy duty off-roader. There have been many subtle but ever improving upgrades since then, including the production of the four door models from 2007 and the fan base of the car has ever increased. Still today the Jeep Wrangler is one of the most agile off-road SUV’s. After market companies have created an enormous amount of additional gear and accessories to suit all off-road environments but none more popular than Mopar! I had the privilege of being given the keys to the Jeep Wrangler Sahara but not just any Sahara. This was fitted out with all the latest Mopar gear.  Everything every 4x4 nut would want. This Jeep was all ready to hit the dunes and that was exactly what I did: