A lot of manufacturers love calling their flagship model the “best car in the world”. But the truth is, most of these aren’t really that. However, if there is one motor vehicle that can claim to be the best of its kind, it’s none other than the Rolls-Royce Phantom. While the Phantom nameplate is quite old, what we are interested in here relates to its latest eighth-generation model, which was first launched in 2017. While it was almost perfect, that wasn’t enough – therefore we now have the new Phantom Series II arriving to carry the torch, so to speak. While this is just a facelift, when it comes to a Rolls-Royce, even a minor nip & tuck matters to its elite clientele.

The Phantom Series II uses what the British brand calls its “Architecture of Luxury” platform, which makes plenty of use of lightweight aluminum – even the Cullinan SUV uses the same modular construction. So, what does the Rolls-Royce Phantom Series II bring to the table for all the money you’ll be charged for it? – which, for example, can go well over 2.5-million dirhams (easy)! To begin with, the Phantom Series II gets mild updates on the outside, but its overall design hasn’t been changed in any major way. Having said that, most Rolls-Royce cars tend to maintain their panache and luxurious appeal even as time passes by – this doesn’t apply to all RR cars, though. 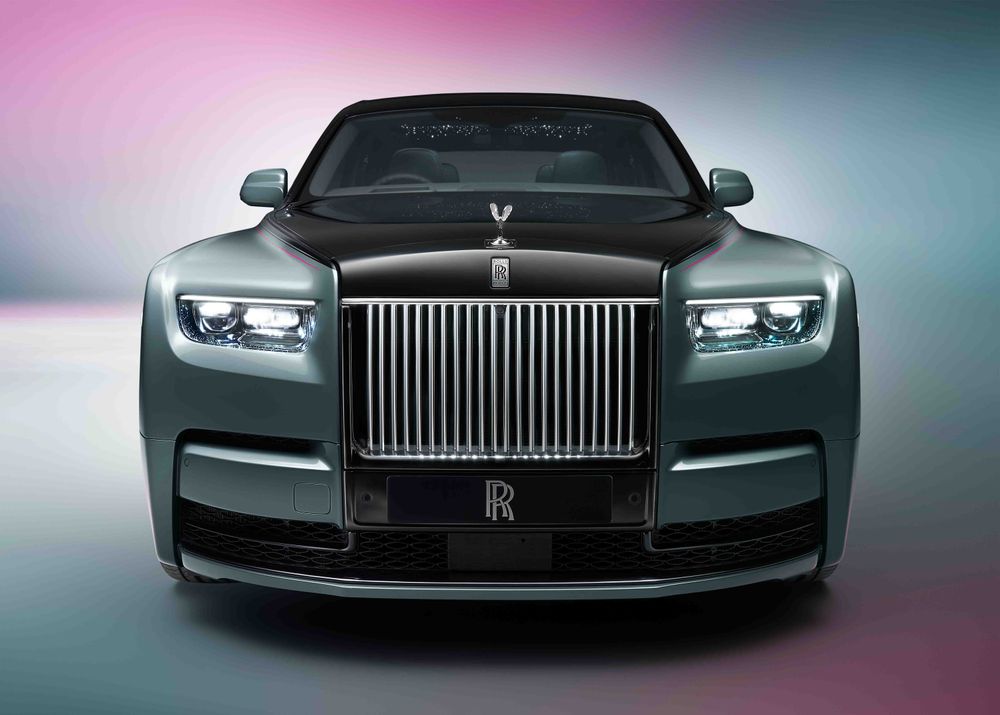 So, what’s new with the Phantom Series II on the outside?

The front fascia of the eighth-generation Phantom has always looked impressive, mostly because of its massive Phantom grille, which now comes illuminated with LED backlighting – and boy does it stand out, even more so in the dark! While the LED headlamps look almost the same as before, the Series II now gets laser-cut bezels that mimic the cabin starlight system – brilliant. One other slight new touch, there is a thin chrome strip running atop the main grille. Finally, the iconic Spirit of Ecstasy that rises out of the front of the hood has now been given a minor makeover (it’s basically more aerodynamic than the old mascot).

Along the sides, the Phantom Series II only has a few fair touches to separate it from its predecessor. However, Rolls-Royce has implemented its version of “revive not renew” by introducing a new (but classy) set of wheels with retro-styled rims that are more reminiscent of the 1920s than the 21st century – that’s a compliment, by the way. Just so you know, you can get custom disc-shaped steel wheels with this new Phantom, which do look absolutely splendid. Of course, customers can always pick and choose whatever exterior color options they want (regardless of their demands), whilst Rolls-Royce has expanded on their already expansive bespoke options list. Rich people of the world… Go berserk!

Oh, Rolls-Royce will be introducing the Extended Wheelbase (EWB) version of the Phantom Series II soon. Just in case you want even more legroom in the back – of course you do. At the rear, there is pretty much zero difference between the pre-facelift Phantom and this new one, which is quite alright. On a side note, if you pick the new and exclusive Platino version, the look and feel of this Phantom is nothing short of a blend between classic and modern – many would love this particular model for sure. Anyway, since you’re already impressed with the exterior look of this huge luxury road yacht, it’s high-time that we take a look at what’s brewing inside the magnanimous cabin of the Phantom Series II.

Obviously, one doesn’t simply buy a Rolls-Royce but acquires it via an exchange of upscale pleasantries and bucket loads of money, but also through the love for a brand that’s been forever known for its ultra-luxurious and well-built vehicles – none of which can just be ‘bought’. When it comes to the Phantom Series II, its interior is exactly where you want to spend the majority of your time in – and trust me, you’ll fall in love with it. Between this new avatar and the previous model, Rolls-Royce has really pushed the boundaries when it comes to the bespoke options that you can avail of, but at the same time, the sheer attention-to-detail will leave you absolutely spellbound.

One of the few things that you can look forward to in the new Phantom Series II is its Connected Car tech, something that will be whole-heartedly welcomed by customers. There is the so-called Whispers smartphone app, which brings with it geo-tagging and personal health status. But, since this is a Rolls-Royce, customers will also have access to the British brand’s exquisite support network and brand-related events that are on the calendar. As mentioned earlier, the new Phantom Series II allows you to choose from an almost-unending list of customization that's known as “Rolls-Royce Collective”.

Moreover, the Phantom Series II comes with a new and thicker steering wheel for a better driving experience. Of course, no one’s going to be actually pushing this heavy luxo-barge around corners anytime soon – also, your well-paid chauffeur would not want to upset you by driving rashly. Needless to say, the seats and their comfort are above & beyond what you’d find even on Business Class on a premium airline. This means that industry tycoons and mega-billionaires will love being driven around in this stunning piece of automotive art and engineering. Oh, if you go for the even-more-bespoke Platino version, the interior can be draped with eco-friendly materials such as special fabrics made from bamboo fibers – albeit, the front seats will still be covered with RR’s lovely-quality leather upholstery.

The Phantom Series II Platino’s interior will also feature the brand’s epic starlight headliner, along with a bespoke ceramic material around the equally-bespoke clock on the dashboard. Overall, the white and silver cabin theme looks and feels yacht-like but also reeks of top-notch craftsmanship. I know I said this Phantom will cost you above AED 2.5-million, but you pick the exclusive Platino version (and its many customizable extras), and you’re looking at an estimated price tag of well above 3-million dirhams!

The smooth yet mighty engine of the new Phantom Series II

The beating heart of the Rolls-Royce Phantom Series II is a 6.75-liter twin-turbocharged V12 engine that stomps out 563hp and an asteroid-shattering 900Nm of torque. While it remains as smooth as an experienced Casanova at a bar, it helps power this 2.6-ton luxury carpet from 0-100 km/h in only 5.4 seconds, which is nothing short of amazing. Moreover, as the engine powers through the 8-speed automatic transmission, you won’t even feel any drivetrain jerk as the Phantom pommels air molecules like a locomotive. Anyway, you got the money to buy one of these? Kindly go ahead and give some us peasants a ride whenever you can.