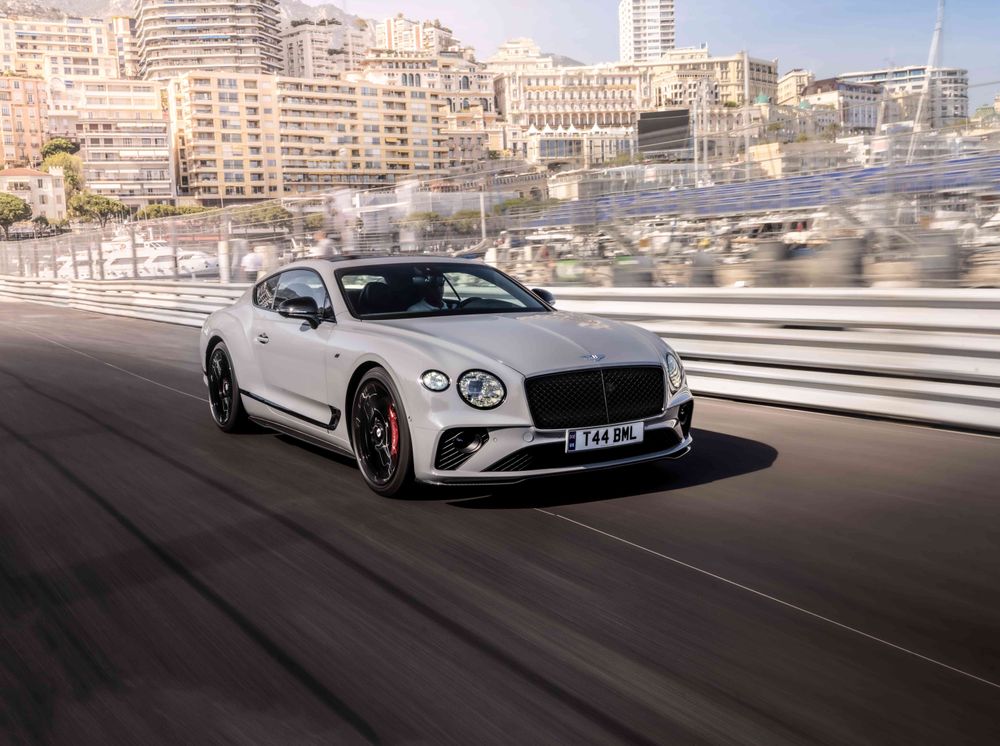 How exciting is it to look at?

The S variant of the Bentley Continental GT is meant for those who want their grand tourer to have that sporty edge, apart from just comfort. And when it comes to the new Continental GT S, the exterior features a large gloss black radiator grille that’s flanked by suave matrix headlamps with bright black surrounds. There’s black surround for the windshield, whilst the front bumper gets carbon-fiber lip extensions on either side, and its lower apron is finished in black. Meanwhile, the long and muscular hood of the Conty continues to impress – making this car look very muscular and sporty. 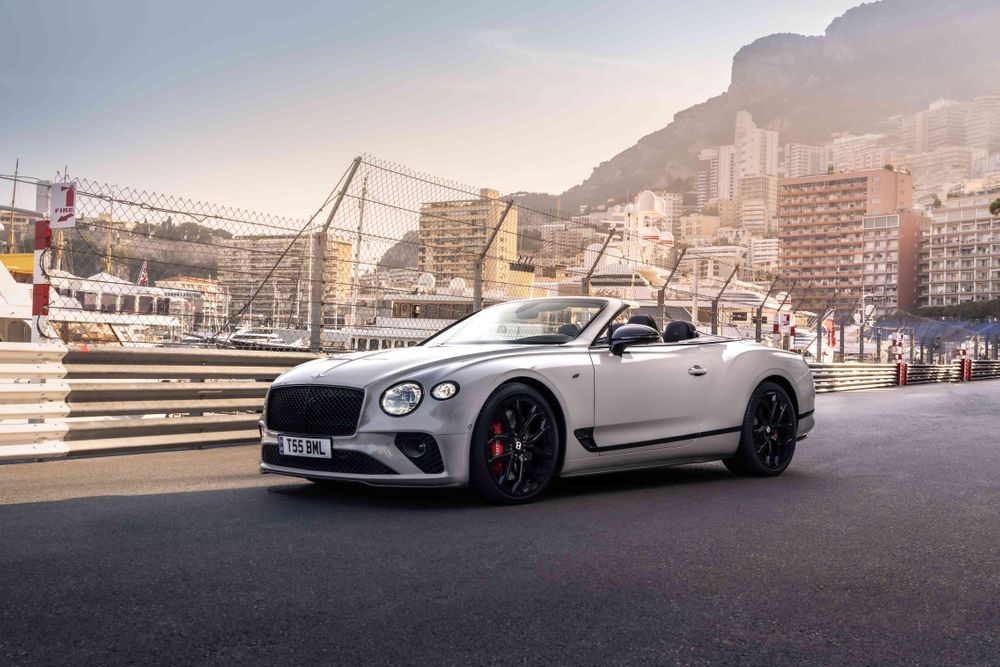 The gloss black treatment is further found on the door mirrors and window surrounds, whilst the ‘S’ badges on the front fenders are also finished in the same color. While the rims of the new Continental GT S can be optioned in the new Pale Brodgar Satin finish, it’s usually offered in an all-gloss black paint just like the rest of the highlighted areas on this car. Of course, this being a Conty S, the wheels available as standard are large 21-inch models that are, to no one’s surprise, finished in gloss black. Then again, you can upgrade to the even larger 22-inch rims that look spectacular with their unique Y-shaped spokes, which are bespoke for the S! Bentley has then painted the massive brake calipers in red – of course they did.

When it comes to the side profile of the new Continental GT S, it sure looks absolutely sublime, with its enlarged wheel arches, hunkered-down stance, and carbon-fiber side skirts (similar to the ones found on the Speed). Moreover, there’s a gloss black trim that runs between the side vents, all the way up to the rear bumper. The silhouette sure is sporty and enchanting – a Bentley this one sure is. Usually, the convertible versions of GTs don’t look more appealing than their hard-top siblings. However, when it comes to the new GTC S, it sure looks drop-dead gorgeous, especially when viewed from the front third. Then again, there isn’t a bad angle on these two cars, anyway. 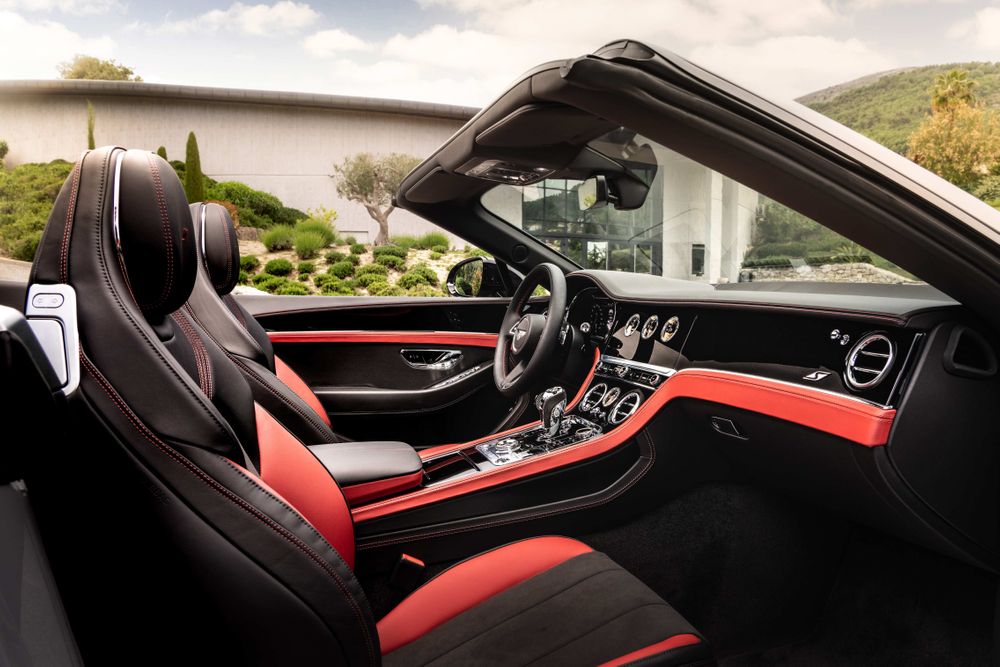 At the back, the new Continental GT S gets quad exhaust pipes finished in black, and LED taillights that feature the gloss black surrounds (just like with the headlights up front). There’s no denying the fact that the new Bentley Continental GT S is not lacking in the flair department, especially not when it comes to its exterior.

Does the interior have that Bentley ‘wow’ factor?

When you step inside a modern-day Bentley, the whole cabin will make you feel special. At the same time, when you’re inside a Continental GT’s cabin, it will make you feel like you’re sitting in a special yet sporty long-distance cruise missile that has the attitude to match. Bentley likes to remind us that cars like its new Continental GT Azure are meant to capture the essence of “Wellbeing behind the Wheel”, as the British brand likes to call it. However, while that slogan still applies on some fronts, this Conty is more about the driving pleasure – well, it isn’t called the S for no reason.

The two-tone interior looks sporty for sure, but doesn’t give up on the luxury appeal that makes this a Bentley either. The neat touches here come in the form of suede material (which Bentley call “Dinamica”) on the steering wheel, gear lever, seat cushion and the seat backrests. Meanwhile, there’s plenty of high-quality leather all over this cabin – from the door pads, center console, instrument console, to the seat bolsters. This combination of sporty suede with luxurious leather is exactly what makes the Continental GT S what it is. The sportiness of this interior goes on, thanks to the GT S-specific gauge cluster and graphics, S design fluted seats with optional quilting, ‘S’ logo embroidered on the headrests, bespoke metal ‘S’ badge on the center fascia, and illuminated Bentley treadplates that feature the ‘S’ emblem.

The new Bentley Continental GT S can be had with a ton of cool new features and tech. Some of this includes the mighty Naim premium sound system, a central touchscreen infotainment system that supports Wi-Fi hotspot, Apple CarPlay and the My Bentley smartphone app. Other features include a wireless charging pad, a multi-zone automatic climate control system, powered & climate-controlled seats, a power sunroof, the Bentley Rotating Display on the center console, Bentley Dynamic Ride with adaptive dampers, and four individual driving modes. There’s also adaptive cruise control, 360° Top View Camera, Lane Assist, and several airbags and other electronic nannies.

Tucked away under that muscular hood is a 4.0-liter twin-turbo V8 that, in the new Continental GT S, is equipped with Sports Exhaust as standard. All of this means that 542hp and 770Nm of torque is fired towards all four wheels, which enables this heavy grand tourer to go from 0 to 100 km/h in a matter of just 4.1 seconds. To stop the new Continental GT S from rolling excessively in the corners, Bentley has fitted it with an active anti-roll control system. This 48-volt system uses powerful electric motors that can muster up to 1,300Nm in order to firm up the roll bars – all within just 0.3 seconds. Meanwhile, this Conty’s top whack is just under 320 km/h.