The Ferrari 812 Superfast is the fastest, the most powerful, and the most exclusive Ferrari currently on sale. The halo model in the brand’s line-up, it wears a starting price of AED 1,331,000 and goes up against Aston Martin and Lamborghini’s finest of offerings, the DB11 and Aventador respectively. 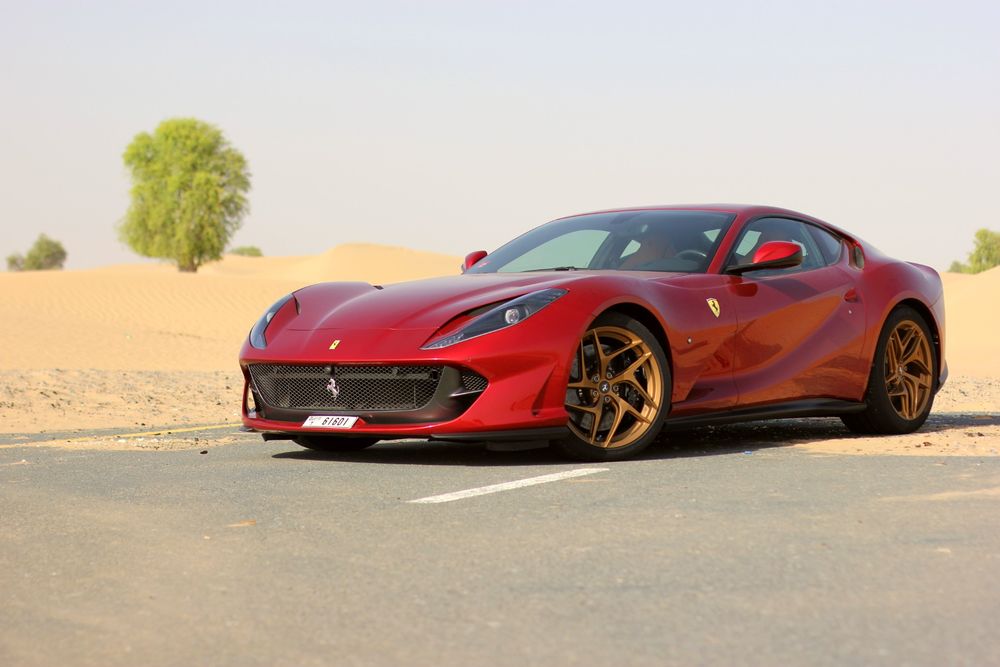 In terms of design, the 812 Superfast is beautiful, it really is, but you don’t need me to point that out. What I will point out is that the Superfast is more than just a pretty face. Every crease, bulge and vent you see along the bodywork, has been sculpted for a specific purpose.

In the front, the large grille and hood vents not only form an aggressive design but perform many other functions. Cool air is channeled through the front to cool down the radiator and engine, and in doing so, it pushes hot air out through the rear hood vents and out the sides of the car. 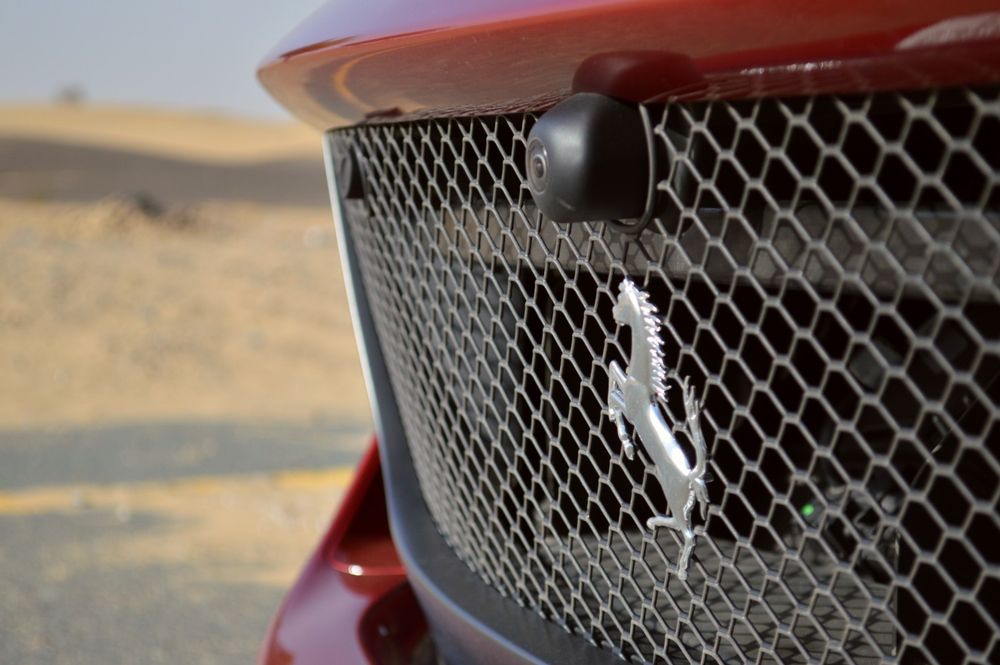 The two-tiered openings in the front grille perform a slightly different role. The upper opening channels air to cool the brakes, while the lower opening pushes air under the car to reduce drag. Hit speeds of 180km/h and the flaps pop downwards to increase downforce and reduce drag.

But if you thought that’s impressive, there’s a lot more. The vents located near the rear window push air through here and out the back for added downforce. Essentially, it performs the function of a spoiler, without the need for a big wing sticking out the back.

Speaking of the back, it’s equally beautiful with its circular lights and quad exhaust pipes but it is the diffuser that is the star attraction. With three deployable flaps, it can open up to 17-degrees depending on the speed you’re driving at to reduce aerodynamic drag and increase downforce. The 812 then, is an aerodynamic work of art! 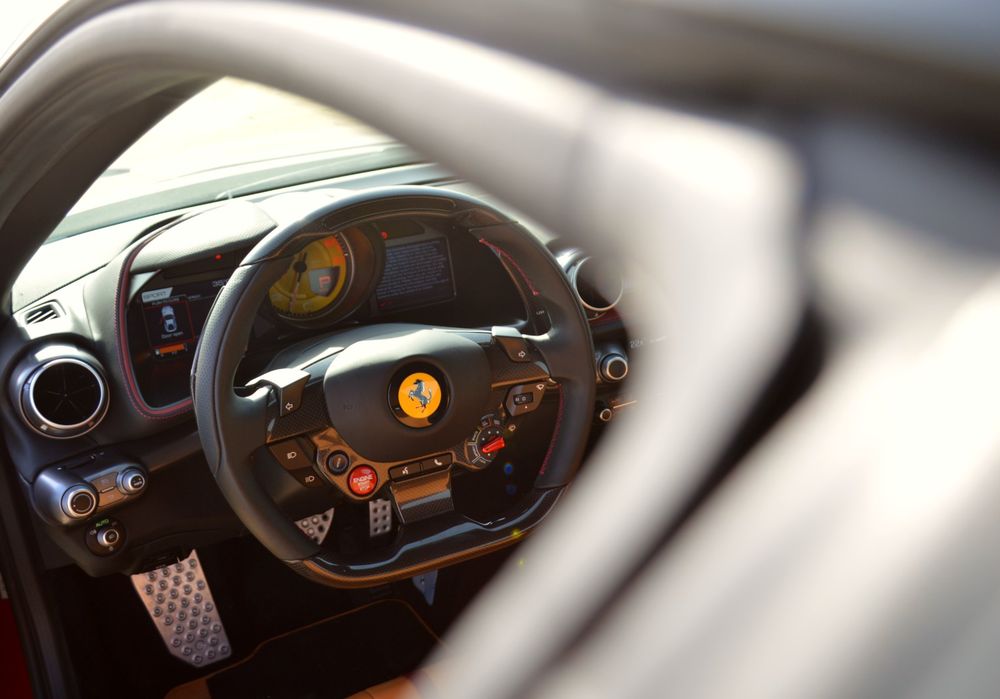 On the inside, it’s just as magnificent. The design of the cabin is similar to the F12 Berlinetta that this car replaces but the quality of materials is second to none. Carbon fiber covers a lot of the cabin, steering wheel, paddle shifters, center console and cargo shelf, while everything else is covered in soft leather.

What’s truly remarkable, however, is the amount of space the 812 Superfast has to offer. Unlike most supercars and grand tourers, it doesn’t require you to be a yogi or contortionist to get inside and the amount of space for occupants and cargo is surprising. Boot space measures in at 320-liters which is enough to fit 3 cabin sized bags and then there’s more storage on the cargo shelf behind the seats too. 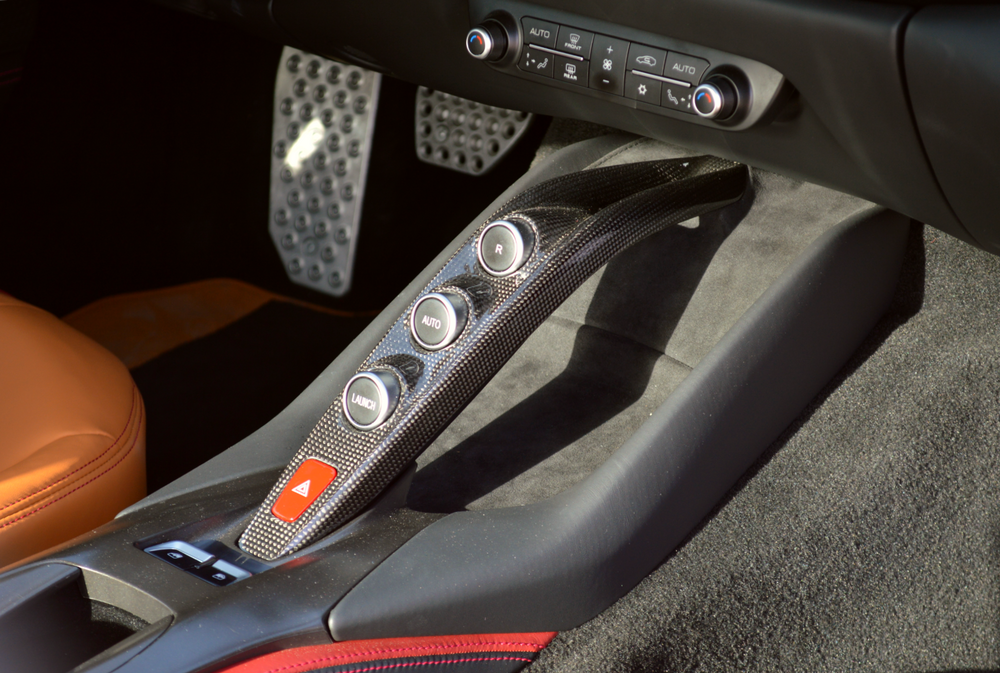 Speaking of the seats, we had Daytona leather seats fitted to our test car. They were electrically adjustable and a little stiff to stop you from being flung around on the bends. However, Ferrari being Ferrari there are seven other seat options ranging from standard seats to monocoque carbon racing seats for the ultimate F1 experience.

In terms of entertainment and convenience features, the 812 offers a JBL audio system, cruise control, a passenger multi-information display and cameras in the front and back. Being low and wide, the camera in the front prevent you from scraping the bumper on a speed breaker or pavement and the one in the back makes parking much, much easier. 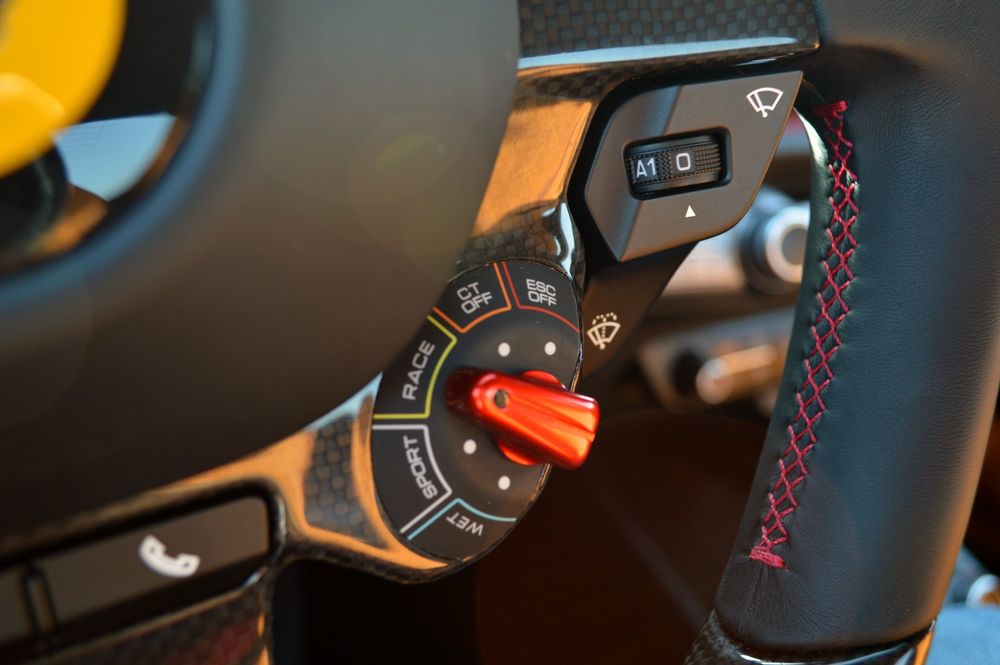 When Ferrari announced they were launching the La Ferrari in 2012, they were criticized for lacking creativity and choosing a dull name. But people drove it, loved it, and Ferrari had the last laugh. With the 812 Superfast, history repeats itself and the 812 Superfast is better than anyone could have expected it to be.

The 812 Superfast, as its name suggests, is super-fast but there is some proper thought behind its name. The ‘8’ stands for 800 Cavallo Vapore (Italian horsepower), the ‘12’ stands for its V12 engine and the ‘Superfast’ badge pays homage to the 1964 Ferrari 500 Superfast. It’s not as elementary as you thought, huh?

What powers this beautiful machine is a phenomenal 6.5-liter naturally aspirated V12 engine. With 789 horsepower and 718 Nm of torque, the 812 is the most powerful naturally aspirated car in the world. Power is sent through a 7-speed F1 dual-clutch transmission to the rear wheels and while all of it does sound intimidating, it isn’t, thanks to Ferrari’s F1 Traction Control system. 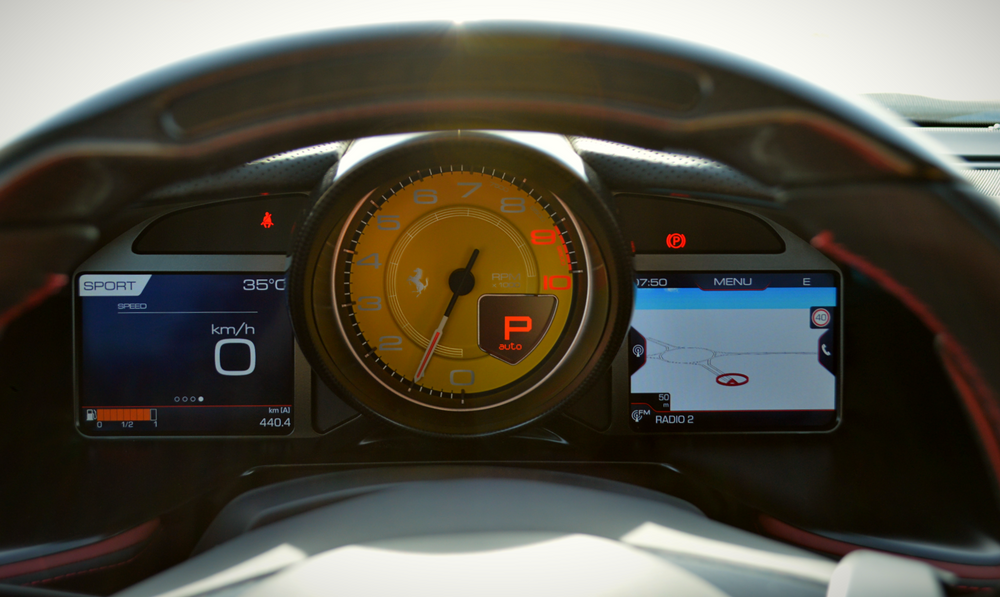 Magnificent in a straight line and even better in the corners, the 812 Superfast is the first Ferrari to be fitted with an electronic steering. While many (including myself) feared this new setup wouldn’t relay as much feedback as the hydraulic steering in other models, that isn’t the case. In many ways, the electronic steering system is just as good, or even better than the one it replaces. 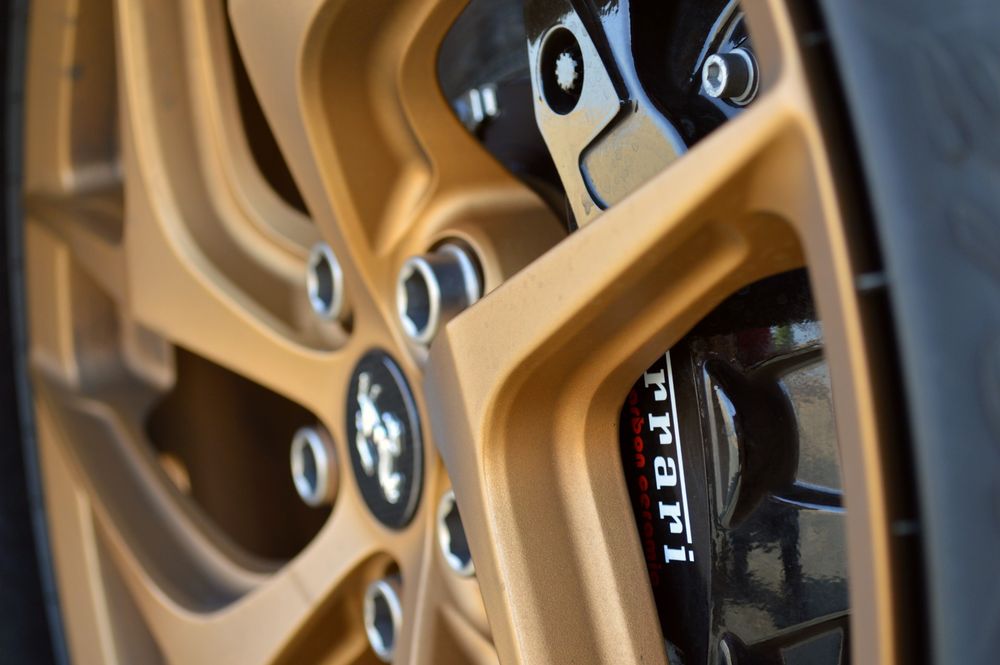 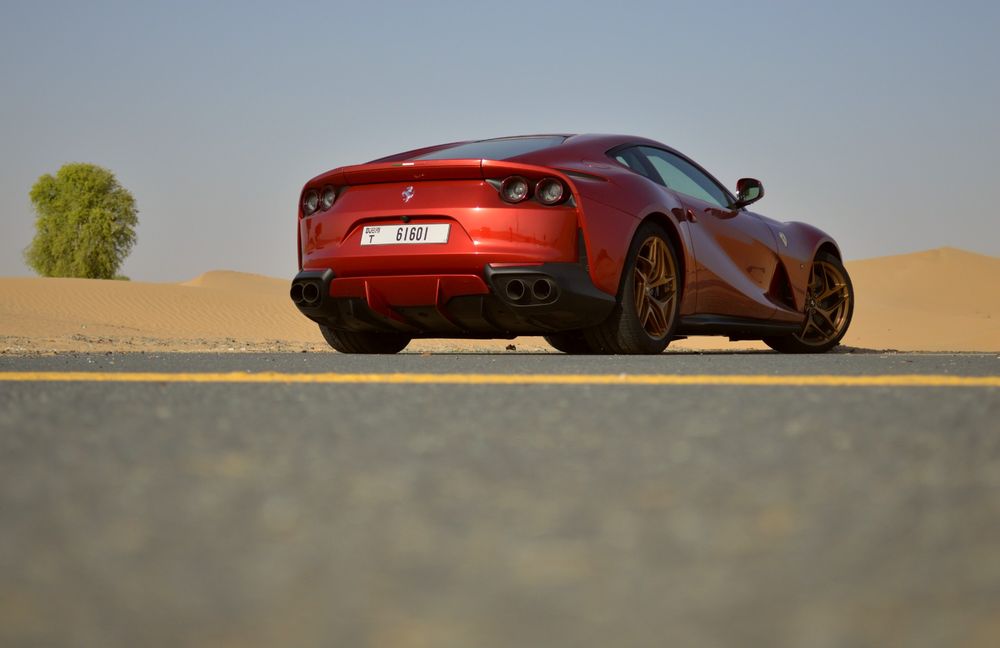 The Ferrari 812 Superfast is the best Ferrari you can currently buy and let me tell you why. Pushing the boundaries of a road-legal car, the 812 Superfast is engaging, thrilling, and quite possibly the last naturally aspirated V12 from the brand. What makes it even more desirable is that fact that those who can afford it, get two cars for the price of one: a grand tourer and a supercar.