A glimpse of the Mercedes Benz CLA 45 AMG

Mercedes-Benz has been the pioneer in establishing the 4 door coupe segment with the CLS. Almost a decade later, they thought of a mass market offering sitting above the A-Class in their fleet for those obsessed with the CLS’ unique styling. That is when the CLA came into being. What we are contemplating however, is the more potent CLA 45 AMG which has been decided for launch in the UAE in 2020 and will go up against the Audi RS3 and VW Golf R. 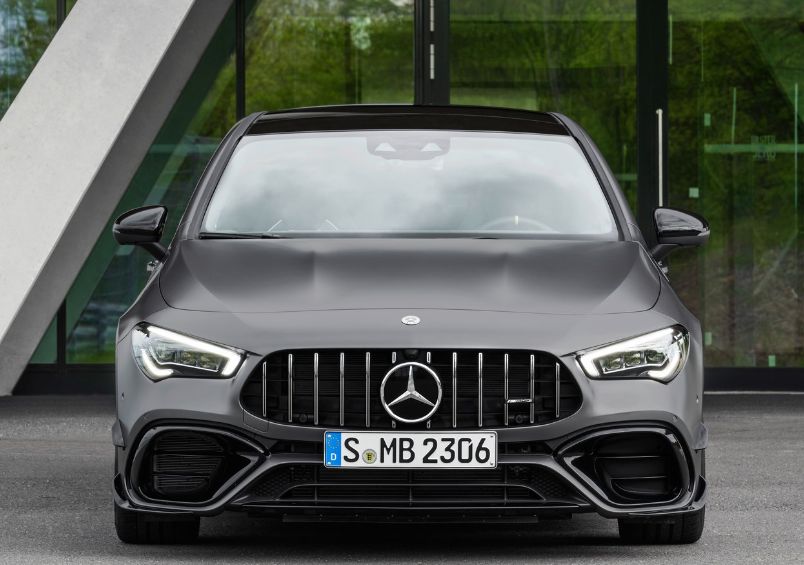 Straight away, the new CLA 45 AMG look more striking and angry when compared to its predecessor adopting the new age styling of Mercedes-Benz cars seen on the A-class. The horizontal slat grille has been replaced by the new Panamericana grille which looks bold having 12 vertical chrome slats. The bumper is characterized by immense air intakes with a profusion of matte black finish lending it a masculine character. The headlamps too, have been reworked and portray a large strip of LED and several dissimilar elements integrated in the unit.

From the front, you might fathom of a CLS but from the side, its heavily compact dimensions elaborated further with the coupe like roofline tells you it’s unmistakably a CLA. The beefier fenders and the matte black rims with contrasting colored brake calipers gives it a sporty appeal.

The rear envisages a host of cosmetic updates. It’s been entirely revised with new tail lamps, a black spoiler and gorgeous matte-black diffusers. The quad exhausts obvious for a car its class and the air vents contribute to an overly aggressive stance. 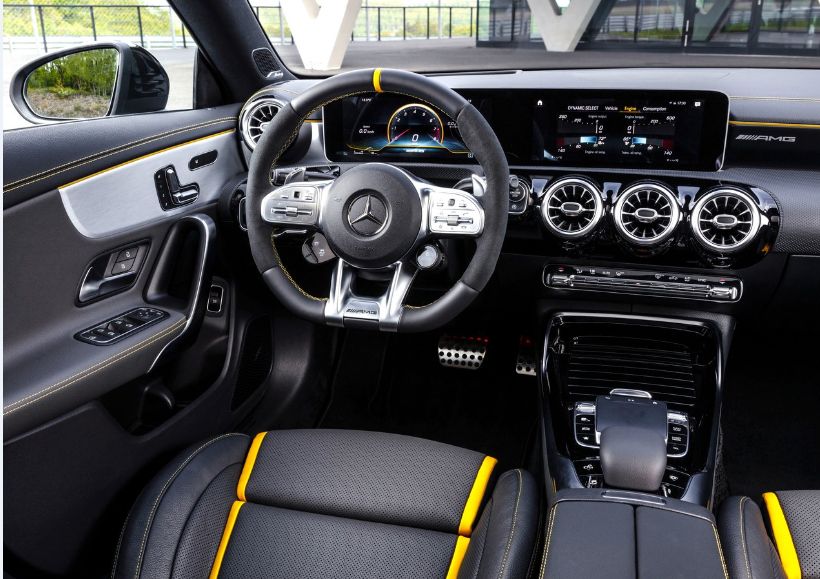 On the inside, you are greeted by an extremely posh cabin which is completely different than its predecessor. This is in line with Mercedes-Benz’s contemporary models and we were expecting it to mark its presence in this car too. What gets the first notice is the dual screen theme for the instrument cluster and the infotainment system both of which are bespoke according to the information you require. Being a sports sedan, you are likely to get contrasting color stitching on the seat belts, steering seats and the dash. The upper half of the cabin and the steering wheel might come covered in alcantara. The racy steering wheel with silver accents and AMG embossed on it is a cool touch. Also unique are the turbine like AC vents, knobs and touchpad covered in matte black.

The most powerful 2 liter inline 4 turbocharged motor recently developed by Mercedes-Benz powers the CLA 45 AMG churning out a mind boggling 382 hp and 480 Nm of torque. This engine will be mated to an 8 speed automatic transmission and will go from naught to 100 Km/h in just 4 seconds. The top speed is electronically limited to 250 Km/h. The torque control feature on the CLA 45 AMG harnesses all the torque selectively. During drifts, it channels all the grunt to the rear wheels but for more grip, it can be divided equally to all 4 wheels. What you will be amazed by is 13.8” brake calipers and adaptive dampers. With the Dynamic plus package, the top speed increases to 270 Km/h.

The new CLA 45 AMG makes for an unignorably versatile package. The earlier gen of the car was no underdog but this one takes things to a different level. It combines breath taking performance, terrific looks, slew of tech on board and the practicality of a 4 door sedan into a brilliantly crafted package. It reconciles some imperfections of its predecessor and definitely has what it takes to give its rivals a stiff fray.